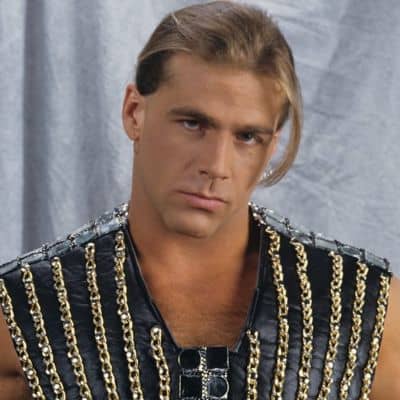 Who is Shawn Michaels Married To?

The famous personality and former Wrestler, Shawn Michaels is a married man, to his wife, Rebecca Curci.

Curci is an American former dancer and actress, who is known as a Nitro Girl in the World Championship Wrestling under the name Whisper.

For the first time, the duo met at a dancing party and started seeing each other after getting introduced by one of their mutual friends.

On March 31, 1999, the duo decided to take their relationship furthermore via marriage.

They wedded at the Graceland Wedding Chapel in Las Vegas, Nevada.

As of 2022, there is no news spread about the beautiful couple’s separation.

Previously, he was married to a lady named, Theresa Lynn Wood.

They got married in 1988 and ended their relationship in 1994 due to personal issues.

Though, they did not have any children together during their togetherness.

Who is Shawn Michaels?

Shawn Michaels is one of the known names in the wrestling industry who has been one of the toughest formal professional wrestlers.

As a wrestler, he has been part of various championships and has earned many awards and nominations.

In addition, he is also an actor and tv presenter.

He is also famous as, ‘Heartbreak Kid’, ‘The Showstopper’, and ‘Mr. WrestleMania.’

The former wrestler was born Michael Shawn Hickenbottom on July 22, 1965, in Chandler, Arizona, the United States.

As of 2022, Shawn Michaels is 56 years old holding the American nationality.

He is the fourth and last child of his parents, Richard Hickenbottom and Carol Hickenbottom.

Being the youngest child, he has three older siblings named, Randy, Scott, and Shari with whom he was brought up in a Military family.

As per his academics, he completed his schooling at the Randolph High School and later joined Southwest Texas State University based in San Marcos, Texas.

After realizing that college life was not for him, he dropped out and decided to pursue his wrestling career.

On October 16, 1984, Shawn Michaels made his professional wrestling debut with the ring name, ‘Shawn Michaels’ after getting trained with, Jose Lothario.

The ‘Heartbreak Kid’ signed the contract with World Wrestling Entertainment (WWE) in the Rockers team in 1987.

Though, he was fired from there within two weeks due to arousal of some misunderstanding.

Again, in 1988, he signed with WWE along with Rockers. Soon, they got popular among the women as well as children.

The WWE management then put him together with Sensational Sherri, who sang the first version of his new theme, ‘Sexy Boy’.

In his first pay-per-view singles match at WrestleMania VIII, he was put over in a match against Tito Santana.

Similarly, he made collaboration with his off-air friend, Diesel in June 1993. In September, he tested positive for steroids after which he was suspended for two months.

He battled against Razor Ramon at WrestleMania X after which Wrestling Observer Newsletter’s Dave Meltzer awarded him a five-star.

He had a good relationship with WWE chairman, Vince McMahon.

The relationship became advantageous for him so, he got a chance to allow himself and his friends, Diesel, Ramon, and newcomer Hunter Hearst Helmsley (Triple H), known together as The Kliq, to appear as a superior wrestling personality in the promotion.

During 1998, Royal Rumble, while playing against The Undertaker, he suffered from severe back injuries.

After the injury, he made his first retirement, and then he appeared as the WWF Commissioner, from November 1998 to June 2000.

In June 2000, he made a comeback to WWE television.

He then went on to play with the other professional players like Kurt Angle, Triple H, Chris Jericho, John Cena, and Edge.

Then, in 2010 he made retirement by playing the final match of his career against The Undertaker at WrestleMania XXVI.

Then, as an actor, he worked on two films, The Resurrection of Gavin Stone and Pure Country: Pure Heart in 2017.

On February 10, 2015, through  Zondervan, Shawn published his memoir titled, Wrestling for My Life: The Legend, the Reality, and the Faith of a WWE Superstar.

David Thomas is also the co-author of the following book.

The net worth of former American Wrestling player, Shawn Michaels is estimated to be around $10 million.

‘The Heartbreak Kid’s salary and income are not available at the moment.

Being a professional former Wrestling player, Shan Michaels is able to steal the attention of fans as well as on social media.

In the past, different controversial statements have been made regarding him.

But, as of 2022, Michaels has not faced any serious rumors and controversies.

As a former professional wrestler, he has well maintained his body.

In addition, he stands at a height of 6 feet 1 inch weighing around 102 Kg.

Moving toward his body measurements his chest size is 43 inches, waist size is 37 inches and biceps size is 17 inches.

Moreover, Shawn Michaels has a fair complexion along with a pair of brown eyes and blonde hair.

Talking about his social media presence, he is present on Twitter and has more than 4 million followers.

On the other hand, there are two unverified Instagram accounts under his name, one of them has garnered about 44.5K followers while the other one is enriched with over 39.1K followers.

10 Exciting facts related to WrestleMania! Click and find them here!