Shawna Gordon is MVP's most valuable soccer player. She plays as a central midfielder and currently a trainer/mentor. She also came to fame when she dated Shemar Moore. 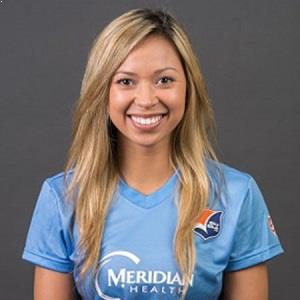 I launched @footballforher for some of the girls I currently train and opened it to others near my hometown area. I have so many ideas and plans for the future! Appreciate all the love and support!?⚽️

Sad but was the last time I played! From working to training for this 13.1 it’s so hard to make time and be motivated to do anything else! Nothing like this feeling though so need to stop with the excuses! Where the games at!?!?⚽️

Shawna Gordon is currently in a relationship. Her boyfriend’s name is not known. This 14th February 2020, the couple celebrated their third Valentine’s day together.

Previously, she dated an actor Shemar Moore. Shemar star of CBS television series ‘Criminal Minds’ in 2015. Shemar brought his girlfriend on ‘The Ellen Show’ in February 2015. Since the summer of 2016, the pair have not been spotted together.

Who is Shawna Gordon?

Shawna Gordon is an American soccer player who plays as a midfielder for Sky Blue FC.

Previously, she played for the Boston Breakers, the Western Sydney Wanderers in Australia, and also Umeå IK in the Swedish Damallsvenskan.

Shawna was born in Fontana, California on January 18, 1990. During her childhood years, she was raised in the nearby city of Rancho Cucamonga.

Additionally, she became interested in the world of soccer since early life. She holds American nationality and holds Norman ancestry. Details about her father and mother are not available.

Talking about her education, Shawna attended Los Osos High School. There, she played for the varsity soccer team all four years and led the team to two league championships.

Shawna Gordon became named to the league’s first-team four times and was named the most valuable player (MVP) as a senior.

Additionally, she played club soccer for Arsenal and played in regional and camps for five years. In her University, Shawna played for the Long Beach State 49ers from 2008 to 2011.

Furthermore, she helped lead the team to three Big West titles as well as three NCAA Tournament appearances. In the same year, she became named Big West Conference Midfielder of the Year.

Shawna signed with the Boston Breakers for the inaugural season of the National Women’s Soccer League (NWSL) in 2013.

However, she did not make an appearance for the club. Later, she joined the Western Sydney Wanders FC in Australia’s W-League for the 2013–2014 season.

Additionally, she joined LA Blues in Los Angeles in the summer of 2014. Next, she signed with NWSL side Sky Blue FC in October 2014.

In addition, she made 13 appearances for the club with 10 starts during the 2015 season. Besides club football, Shawna has also represented the United States on the under-17 national team.

Additionally, she also joined the training camp for the United States under-20 women’s national soccer team.

Shawna has a salary of $85,000 annually. However, her net worth is estimated to be 1 million dollars.

Shawna has kept her personal life and career away from the mainstream media spotlight. Hence, he has not been involved in any notable controversies in her career. Furthermore, there are no rumors concerning Shawna and her career at present.

Talking about her body measurement, Shawna Gordon has a height of 5 ft 6 inches with an average weight of 56 kg. Furthermore, her hair color is blonde/black and her eye color is black.

Shemar Moore and Phaedra Parks are in a relationship!! Moore also opened up on his sexuality rumors! Know more about it here!