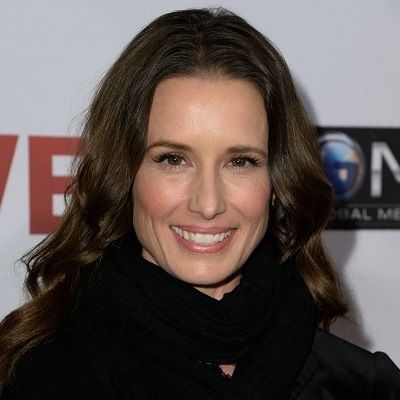 Acting is like a game of tennis. The better your opponent, the better you're going to play. I've had some of my best tennis matches with Tobin [Bell] because he's relentless about truth and has an incredible work ethic.

It was heavy. I had this mouth piece I had to clamp down and they padded it up to try and get it as tight to my head as possible because I really had to fling myself around. If I do something like that, I just go all the way with it.

This scares me [referring to the award statue], I can't bring it home because of my children, I can't watch my own clip, the ghouls at the entrance of tonight upset me, but I do want to say thank you to everyone.

I think the horror fans are surprised when they listen to the record and they actually like it. I mean it's country music, kind of, but it's produced by Chris Goss of Masters of Reality. It crosses a lot of boundaries.

Shawnee Smith eloped with photographer Jason Reposar in 1998 and married him. Soon, they had a daughter, Verve. But the marriage ended in 2003.

After that, Shawnee again got married to a musician Kai Mattoon in 2005. They together had a son, Jackson Mattoon. But they also got divorced in 2006. At present, she is living a single life.

Who is Shawnee Smith?

Shawnee is an American actress and singer. Likely, she is well known for her role as Amanda Young in the Saw films and as Linda in the CBS sitcom Becker. Additionally, Smith once fronted the rock band Fydolla Ho, with which she toured the US and the UK. She was also half of Smith & Pyle, a country-rock band, with actress Missi Pyle. Whereas, she co-starred as Jennifer Goodson, the ex-wife of Charlie Goodson (Charlie Sheen), on the FX sitcom Anger Management, which ended in 2014.

Shawnee Smith was born in Orangeburg, South Carolina, the United States on July 3, 1969. Her birth name is Shawnee Rebecca Smith. Her father’s name is James H. Smith (a financial planner and former ‘US Airforce’ pilot) and her mother’s name is  Patricia Ann ( an oncology nurse).

When Shawnee was a year old, her family moved to Van Nuys, California. Whereas her parents divorced when she was 2 years old, and her mother remarried when she was 8.

There is no information about her siblings. Shawnee holds American citizenship and mixed ( English- German- Scottish- Irish) ethnicity. Her birth sign is Cancer.

Talking about her profession, Shawnee started her professional acting career at the tender age of 8, when she appeared on stage in the repertory ‘A Christmas Carol.’ She participated in a stage play at 15. She made her first TV appearance in a ‘McDonald’ commercial titled ‘Best Friends’ in 1978 and made her feature film debut with ‘Annie’ in 1982. She joined the Screen Actors Guild at age 9.

Shawnee Smith is also a musician who plays the guitar, the piano, and the drums. As a singer, she has contributed to the soundtrack of ‘Saw III’ and to the soundtrack of ‘Catacombs.’ Shawnee fronted the punk/metal band ‘Fydolla Ho’ in the early 2000s. The band released their debut full-length album in December 2001. Shawnee was also part of a country music group called ‘Smith & Pyle,’ with actor Missi Pyle.

Talking about her awards, a nomination she won the Eyegore Award.

There was a rumor about Shawnee’s pregnancy. Currently, she is far from rumors and controversies.

Shawnee Smith has a height of 5 feet 3 inches and she weighs 52Kg. Additionally, she has a measurement of 34-24-32 inches. Shawnee’s hair color is dark brown and her eyes color is green.