Updated On January 26, 2023 | Published By: Brandy Stratton | In Child , Lifestyle
Share this 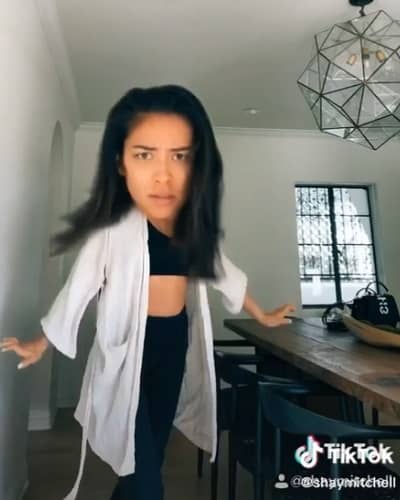 Shay Mitchell has been rocking TikTok trends since 3rd March 2020 with a video of her lip-syncing on the sound of YouTuber Bretman Rock.

On 11th March she shared a video of her copying the dance of popular TikTok star Charlie D’Amelio in the song Out West. Mitchell has been showcasing her amazing dancing skills.

Real eyes, realize, real lies 👀@mimles_ #TimeWarpScan #boochallenge Head to my link in bio to see what this look is for.

Likewise, she even did the trend of ‘babytemptationchallenge’ with her daughters like Kylie Jenner and Stormi Webster. Recently, she amazed the fans with her comedy version of the ‘busitdownchallenge’.

Through her trendy videos and dancing skills, Shay has gained 5.3 million followers. She has gained 76.6 million likes on her TikTok account.

What is the age of her baby?

Shay Mitchell gave birth to her baby daughter Atlas Noa on 8th October 2019. She is 1 year and almost 4 months old. Her name was inspired by Shay’s travel. Her father is Matte Babel whom her mother is dating since 2017. Atlas has featured in a 2019 article published by POPSUGAR. Shay talked about feeling good after the birth of Atlas saying,

“Honestly, I think I felt really good after [giving birth].”

Talking about her 1-years old daughter, she revealed,

“I’m constantly reading with her. She loves music, so I’m always playing different songs, going between kid nursery rhymes to Bob Marley. Dancing is her thing now as well, so that’s really fun. … Bath time is like a theater production. I love it. There really isn’t anything that I don’t enjoy doing with her.”

She got help from an influencer Kelsey Heenan whose Four Weeks of Focus program she did through OpenFit.

Shay Mitchell is a beautiful Canadian actress, model, entrepreneur, and author who is best known for her role in ‘Freeform’ series ‘Pretty Little Liars’ as Emily Fields.

Also, she is known for being a spokesperson for ‘Pantene Pro-V Nature Fusion Collection’ and an ambassador for the ‘Somaly Mam Foundation’ which is an organization focusing on combating the global sex trade. Read more bio.