Shay Mooney is an American singer and songwriter. He is widely known as one of the two members of the group Dan+Shay. He is married and has two sons. 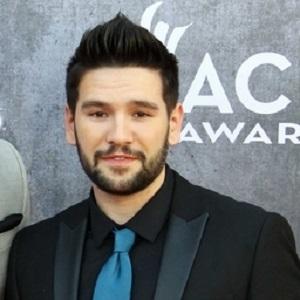 Shay Mooney is married to Hannah Billingsley on October 20, 2017. She is a former Miss Arkansas and they engaged in August 2016.

They are expecting a baby which they revealed on October 8, 2016, via Instagram. Pregnant Hannah made an appearance on the 2019 CMA Awards Red Carpet with her husband Shay.

The couple has welcomed a son named Asher James Mooney on January 24, 2017. After nine months of the birth of their son, the couple tied the knot.

Then again in Feb 2020, this couple is blessed with another child. They named him Ames Alexander Mooney. The family is currently living together and they are spending quality time with each other.

Previously, he was in a relationship with Veronica Ballestrini from January 2012 to March 2013. The pair worked together in some tracks in Veronica’s Flip Side but they later got separated.

Who is Shay Mooney?

Shay Mooney is an American singer and songwriter. He is widely known as one of the two members of the group Dan+Shay.

His father is Rick Mooney and his mother is Cindy Mooney and has a sister, Gabby Mooney. Shay holds American citizenship and his ethnicity is a mix of English and Irish.

He went to Union Christian Academy, a private Christian school, and then she attended Van Buren High School. He enrolled at the Valley Forge Christian College for Bachelor’s degree but dropped out after a year in order to pursue a career in music.

Shay Mooney started his career in music in YouTube ‘stage’ and also posted cover and original songs with his girlfriend Veronica Ballestrini, which reached over 150,000 views combined. He also wrote a song, ‘Lonely Alone’ for Veronica’s album.

Later, Shay Mooney was signed with Nappy Boy Entertainment music label and met a promising country singer, Dan Smyers on December 7, 2012. After that, they began writing songs and in the time frame of two months, they have had many publishing offers. They signed in to Warner/Chappell Musci as Dan+Shay.

They began working in the new albums with the help of Danny Orton, Rhett Atkins, and Ben Hayslip. Their single, ’19 You+Me’ became a huge success and released their debut album ‘Where It All Began’ on April 1, 2014. The first single of the album, ‘Show You Off’ was released on May 12, 2014, and released the third single ‘Nothin’Like You’ on February 23, 2015.

The group won 2015’s ASCAP Country Musci Awards in the category Most Performed Songs and also won CMT Musci Awards for Duo Video of the Year-tequila in 2018.

Also, their major win is the Grammy Awards in 2019. Apart from that, the duo won several awards and nominated several times in their career.

The talented personality must have accumulated a decent sum of money from his professional career. However, he has not revealed his exact net worth, salary, and income.

Shay Mooney has a height of 5 ft. 7 inches and weighs 75 kg. He has dark brown eyes and black hair.

To know more about Niykee Heaton, Jasmine Guy, and Wally Kurth, please click on the link.

Dan Smyers married Abby Law after the engagement; Here is the whole details about their relationship, marriage and engagement