Shayne Ward is an English actor and singer. He is engaged to Sophie Austin and they have a daughter together.

In 2003, Shayne Ward was in a romantic relationship with actress Faye McKeever and got engaged to her in 2012. Unfortunately, the couple broke up in 2014.

In 2016, he started dating actress Sophie Austin and became parents by welcoming a baby girl in this world. In December 2017, the couple engaged. 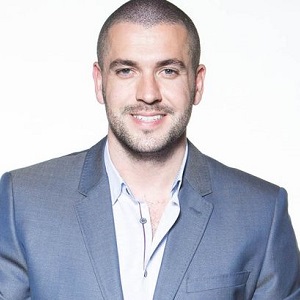 If somebody tells me I'm famous I say, 'I'm not.' I can't see myself as famous and I don't think I'll ever call myself famous. I definitely don't feel famous

I love a challenge, and I think it's when people least expect you to do something that you often do your best.

Who is Shayne Ward?

Shayne Thomas Ward is an English singer and actor. He is best known as the winner of the second series of The X Factor. His debut single, “That’s My Goal” reached number one on the UK Singles Chart.

He is also known for starring as Aidan Connor on the long-running British soap opera Coronation Street, for which he was awarded a National Television Award in 2016.

Before his participation in The X Factor, he was in a band called performing at pubs, clubs, and weddings.

Her educational background and qualifications are, however, unknown to date.

Shayne Ward’s career initiated with his participation in X Factor in 2005. He ended up winning the show. The very next year, he signed a recording contract with Syco Music In 2006, his self-titled debut studio album was released. The album did very well as it was certified 4x Platinum in both Ireland and UK.

It rose up to number 1 on the chart in both the countries. His single, “That’s My Goal” out of this album reached number one on the UK Singles Chart. The song was selling more than 300,000 copies on its first day becoming the third fastest-selling single of all time in the UK.

His latest album was released in 2015 on Pledgemusic. In the same year, he starred as Aidan Connor on the long-running British soap opera Coronation Street, for which he was awarded a National Television Award in 2016. As of 2022, he has a net worth of $3 million.

Shayne Ward stands with a perfect height of 5 feet 9 inches (1.753 m).  His exact weight is not known but he and Sophie have been working out a lot recently and have lost considerable weight.

His hair color and eye color is also dark brown.