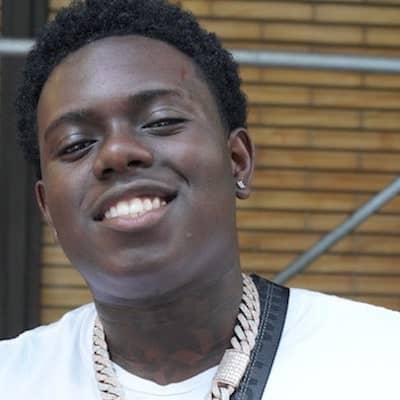 But regarding the affair and his girlfriend’s details, the data are hidden.

Who is Sheff G?

Sheff G is an American rapper as well as a songwriter. He is popular for his musical projects like The Unluccy Luccy Kid, One and Only, etc.

His birthdate is 23 Sep 1998 and he was born in New York City, the US as Michael Kyle Williams. But the name of his mother plus his father is under the rug.

Sheff’s ancestry is a mix of Trinidadian-Haitian and regarding his academics, the particulars are not shared.

Sheff G is an emerging face of the musical world. He is a hip-hop artist and is with the Winner Circles label.

His first single was titled No Suburban that hit the media in 2017, gave him fame. Further, in 2019, his mixtape The Unluccy Luccy Kid came out. Then a year later in 2020, he gave his fan his first album One and Only.

Michael’s other popular singles are On Go, Lights On, Weight On Me, We Getting Money, Automatic, Run It Up, Tip Toe, All My Life, Melody, Moody, Mistakes, etc.

As of 2021, he has earned an estimated net worth of around $100k US. The yearly salary from his musical journey is not calculated.

This rap artist at present is keeping himself away from rumors and desperate scandals. But when he was in high school, for firing gunshots he was arrested plus probated.

He was also charged with a felony gun charge and robbery in Nov 2015, for which he spent months in jail. Recently, in July 2021, he was caught by the police and his case for having a gun is in court.

Sheff G’s height is 5 ft 6 inches and his body weight is 70 kg. In addition, his eyes are dark brown and he has hair in black color.

Further, his YouTube channel is more than 399k subscribers.

Jay Electronica
Tags : No Suburban One and Only Rapper

Coronavirus mutations has led to increase in speed of transmission but no impact on virulence or fatality!