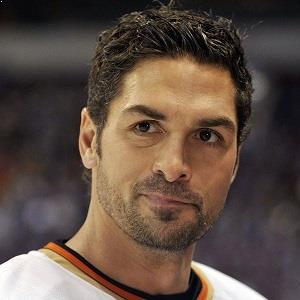 Sheldon Souray was previously married to former Baywatch actress Angelica Bridges. The pair were together from 2002 to 2007. Additionally, they have two daughters from this relationship. Later, he married former WWE professional wrestler Barbara Blank (Kelly Kelly) in February 2016. However, the marriage did not last long and they separated in October 2017.

Souray was born in Elk Point, Canada on July 13, 1976, to parents Richard Souray and Lillian Parenteau. Additionally, he has one sister who is two years older. His parents divorced while he was still in elementary school. Initially, he lived with his mother, however, he later moved in with his father at the age of nine. He is of Canadian nationality. Furthermore, he belongs to Métis ethnic background.

Souray was initially a member of the Fort Saskatchewan Traders in the Alberta Junior Hockey League. Later, the New Jersey Devils drafted him in the third round, 71st overall in the 1994 NHL Entry Draft.

Additionally, he scored his first NHL goal on December 16, 1997, in the game against New York Rangers. He did not play a single game in the 2002–03 season. However, he had a breakthrough 2003–04 season and he successfully amassed 15 goals and 35 points.

Furthermore, Souray also represented his home country Team Canada internationally in the 2005 IIHF World Championships. He finished the 2005–06 season with 12 goals and 39 points. Similarly, in the 2006–07 season, he finished with a career-best 26 goals, 38 assists, and 64 points. Later, he signed a five-year, $27 million contract with the Edmonton Oilers on July 12, 2007.

Souray had a salary of 3.5 million USD in 2014. Additionally, he has an estimated net worth of around $ 9 million at present.

Souray became part of a controversy after he broke his hand in a fight with Adirondack’s Matt Clackson. Additionally, he is termed as the Oiler’s most controversial player to date. At present, there are no rumors concerning his life and career.

Talking about his body measurement, Souray has a height of 1.93m. Additionally, he weighs around 108 kg. Furthermore, his hair color and eye color is dark brown.

Souray is active on Twitter. He has over 34.3k followers and has tweeted more than 1.9k times. However, he is not active on Facebook and Instagram.