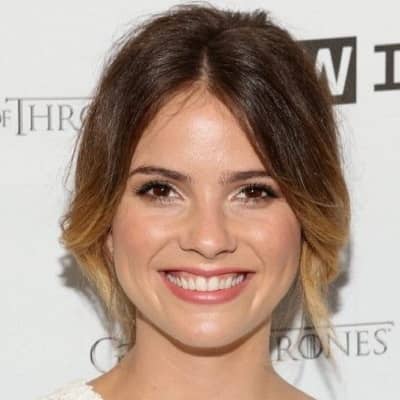 I was a good student, but I was the biggest procrastinator.

I was the happiest in English class, and algebra was where I cried.

I was the fastest typist in my school, and I had an obsession with spelling and memorizing.

I worked at a local country club that I never belonged to.

I grew up in Louisiana - a little suburb right outside of New Orleans - and I wouldn't have it any other way!

Before, she was dating actor Jay Kenneth Johnson. They met on the sets of Days of Our Lives and dated him for nearly five years. Her relationship with Jay is the only confirmed relationship she formerly had.

And likely, Shelley was rumored to be dating Gotham star, Ben Mckenzie in September 2013. She was also rumored to be in a relationship with The Secret Circle co-star, Thomas Dekker in February 2012.

Who is Shelley Hennig?

Shelley Hennig is an American actress and model. She has also won the Miss Teen USA title in 2004. She appeared in the NBC soap opera, Passion which was a part of her prize package.

Hennig appeared as Stephanie Johnson on the soap opera Days of Our Lives (2007–2011, 2017) and received two Daytime Emmy Award nominations for her performance.

She was born on January 02, 1987, in Metairie, Louisiana, the USA. Her birth name is Shelley Catherine Hennig.

Talking about her nationality, she is American, and she belongs to German ethnicity.

She studied at Destrehan High School where she graduated as a student with academic excellence.

In the year 2003, Shelley Hennig took in a state show held in Lafayette, Louisiana “the Miss Louisiana Teen USA 2004.”

Shelley as a reward got a one-year modeling contract, with Trump Modeling Management and a scholarship to The New York Conservatory for Dramatic Arts.

After she won the beauty contest, she also received a one-year modeling contract with Trump Modeling Management and a scholarship to study at The New York Conservatory for Dramatic Arts.

Being a titleholder, she traveled along with the Miss Universe and Miss USA and works for several charities such as Seeds of Peace, D.A.R.E., Sparrow Clubs, and SHiNE.

Thus, Henning worked with a local Louisiana non-profit organization called Council on Alcohol and Drug Abuse where she mentored young souls about the impacts and results of drugs and alcohol abuse.

She also performed in the NBC soap opera, Passion which was a part of her prize package. On August 8, 2005, she was seen on MTV’s The Reality Show where she tried to win the show but was rejected.

She is best known for her contract role of Stephanie Johnson in the movie, Days of our Lives whose cast she joined on April 20, 2007. For this role, Shelley was nominated twice, once in 2010, and in 2012 Daytime Emmy Awards for the Outstanding Younger Actress In A Drama Series category.

She played the major character of Diana Meade, in the TV series named, The Secret Circle from 2011 to 2012.

After that, she performed on MTV in a series called Zach Stone is Gonna be Famous, but the show was removed after a season. In 2013 Shelley was seen appearing in the movie titled, The Independent.

She has also portrayed in the MTV series, Teen Wolf as a character of Malia Tate. For her portrayal of Malia, she won Choice Summer TV Star: Female at the 2016 Teen Choice Awards.

A year later, she appeared in the Blumhouse horror films Ouija and Unfriended. Moreover, she also appeared on The Band Perry’s music video for “Gentle on My Mind” alongside The Hunger Games actor Alexander Ludwig.

Likely, in 2017, she starred in country music artist Maren Morris’ music video for “I Could Use a Love Song.”

In the year of 2018, she played a supporting role as a photographer, Carrie Grey, in the Netflix romantic comedy When We First Met. Lately, in 2020, she appears in NBC Comedy pilot Crazy For You in a leading role.

She has amassed a good amount of money from her career. Her net worth is around $1 million. Other information regarding her salary is not available.

She has different rumors that she is in a relationship with The Secret Circle co-star, Thomas Dekker in February 2012. Furthermore, in 2012, there were dating rumors about her and Gotham star, Ben Mckenzieindating.

Up to now, she is not been in any type of controversies.

Shelley Hennig stands with a height of 5 ft 8 inches (173 cm). Likely, her weight is 57 kg and she has dark brown colored hair and eyes.

Furthermore, she is also active on TikTok with around 2K followers and 67K likes.

Also, get to know about Chase Rutherford, BadkidJay, Hazel Irvine, and Chris Redd.