Shenae Grimes pregnant with her 2nd child! Know about her net worth in 2021 and few quick facts 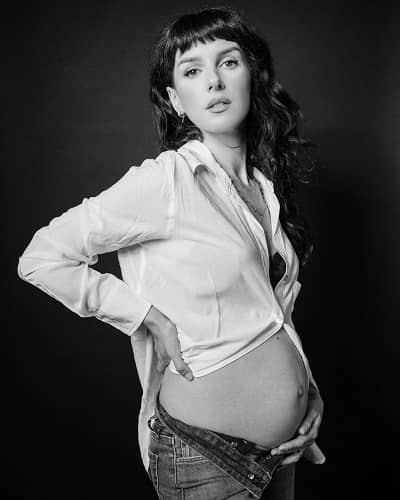 She shared the pregnancy news with a set of black and white photos on Instagram where she showed off her growing baby bump. In another picture, she held her daughter.

“Here we go again!!! We’re feeling incredibly blessed to be growing our family and this gift truly couldn’t have come at a better time. We’ve just settled into our new house and it really feels like home now. Bowie is absolutely itching for a little sibling to play with and look out for.”

“We’ve shown ourselves how incredibly strong and capable we are after tackling our recent cross-country move … in a car … with a toddler and a dog … during a pandemic. So bring it on, Baby Beech #2! We’re ready for ya!!!”

Grimes also posted a video of her pregnancy journey on her YouTube channel. She is very excited to start the new chapter of her love story on Valentine’s Day 2021. In the video, she teased her husband that she has already learned the gender of their coming child. They are set to reveal the baby’s gender in an upcoming video.

How much is the net worth of Shenae Grimes in 2021?

Shenae Grimes has a net worth of $4 million as per Celebrity Net Worth. She has worked in films like The Cross Road, Dead Like Me: Life After Death, Scream 4, Empire State, Sugar, Blood Honey, and The Rake.

Her TV series work includes The Detail, iZombie, The Mechanics of Love, Newlywed and Dead, Britain & Ireland’s Next Top Model, Punk’d, The Hills, Overruled!, True Confessions of a Hollywood Starlet, Picture This, 90210, Naturally, Sadie, and more. Shenae Grimes moved out of her LA house recently.

Also read How are Damien Berry and Feby Torres’s love life going? Know about his trouble with the law and few quick facts

Likewise, she is also known for her recurring role as Arden Alcott on the television series Naturally, Sadie (2005-2007).

She played Darcy Edwards on Degrassi: The Next Generation for four seasons. She also had a cameo role in the horror film Scream 4 (2011). Read more bio…

Mandy Moore can’t wait to welcome a baby with husband Taylor Goldsmith! Know about their married life, net worth in 2021
Tags : Actress Scream 4