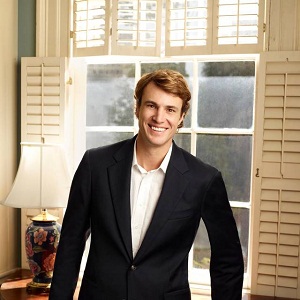 He is not married, and there no any information about having his any wife or girlfriend. He is not involved in dating and affair with any girls.

Who is Shep Rose?

Shep Rose is one of the six cast members of the reality television show, Southern Charm. He was born on September 27, 1980, in Hilton Head Island, South Carolina USA.

He is the nephew of former South Carolina Department of Public Safety Director, B Boykin Rose.

Shep Rose was born on September 27, 1980, in Hilton Head Island, South Carolina USA. He was one of three children born to Frances Rose and William Rose, with sister, Katherine, and brother, Whitaker. His nationality is an American but there is no information about his ethnicity.

He was raised in Hilton Head Island, in a relatively wealthy family that owns land in Boykin, South Carolina. He is the nephew of the noted B Boykin Rose, the former Public Safety Director of South Carolina.

He was educated at Hilton Head Preparatory School, where he studied until ninth grade, before transferring to a boarding a school called Episcopal High School.

He enrolled at the University of Georgia before moving to Vanderbilt University School of Management.

After graduating from Vanderbilt University, where he eventually obtained a master’s degree, He returned to his hometown, Hilton Head, for a few years, and started working in the real estate field around Bluffton and Savannah. In 2008, a time when the financial crisis was being experienced in the US, he had to suspend his business and decided to move to Charleston, South Carolina.

While living in Charleston, he was lucky enough to be selected for a role in ‘Southern Charm,’ a series in which he is known as a fun-loving, free-spirited man who tends to get along with everyone. He also has opened his own restaurant Palace Hotel, which will only add to his bank account along with his reality TV star status.

Rose’s net worth was estimated to be $ 200 Thousand.

The series aims to portray Charleston but has received some criticism from locals, although not against Shep himself, as it may not be the way citizens like to see the city portrayed.

Shep has a height of 6 feet 7 inches. He has brown hair and brown eyes. Furthermore, there are no details about his body measurements.