Sherilyn Fenn is an American actress. She is in a relationship with Dylan Stewart and is the mother of two kids.

She is a married woman. Previously, she was in a relationship with an actor Johnny Depp in 1986, the couplet stayed together for several years then they got separated.  Later on, she dated a pop singer Prince in 1985.

She got married to a writer Toulouse Holliday on November 4, 1994, with whom she has a son namely, Myles Holliday. They got divorced in 1997.

Currently, she is in a relationship with a computer consultant Dylan Stewart with whom she has a son named Christian Stewart. 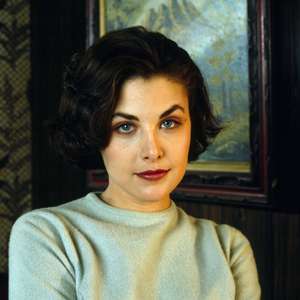 I've never wanted to do the same thing twice. If a script doesn't surprise me in some way, I simply can't commit to the project

I was disillusioned with acting after the pilot of Twin Peaks. I'd been doing low-budget films. I didn't want to walk through movies being a pretty ornament.

Who is Sherilyn Fenn?

Sherilyn Fenn is an American actress. Likewise, she is famous for her role in the TV show “Twin Peaks”. She is nominated for Golden Globe Awards and Emmy Awards.

Sherilyn was born in Detroit, Michigan, the USA on February 1, 1965, to parents Leo Fenn and Ariene Quarto. Her birth name is Sherilyn Ann Fenn. Her mother is a keyboardist whereas, her father is the manager of rock bands such as The Pleasure Seekers, The Billion Dollars Babies, and Alice Cooper.

Talking about her education, she attended West Bloomfield High School. Then she attended Lee Strasberg Theatre and Film Institute.

She started her career with a number of Big Movies such as “The Wild Life” (1984), Thrashin (1986), in the same year “The Wraith” (1986), and during 1987 a horror movie named as “Zombie High”.Similarly, she has also worked with Lynch on his film ‘Wild at Heart,’ starring Nicolas Cage and Laura Dern.

She later co-starred with John Malkovich and Gary Sinise in the 1992 film adaptation of John Steinbeck’s ’Of Mice and Men.’  In 1993, she played a small role in Jennifer Chambers Lynch’s film ‘Boxing Helena.’

Likewise, in February 2016 she joined the cast of the American version of the “Shameless”.

Sherilyn Fenn: Salary and Net Worth

On talking about her salary and net worth he earns a decent amount of salary has not revealed but his net worth is about $ 500 thousand dollars as of 2022.

On talking about his lifetime achievements and awards, she was nominated for Best Performance by an actress in a supporting role in a series, Miniseries or Motion Picture Made for Television in Golden Globe Awards “Twin Peaks” (1990). Likewise, in Primetime Emmy Awards she was nominated for Outstanding Supporting Actress in a Drama Series “Twin Peaks” (1990).

There was a rumor that her role in ‘Twin Peaks’ is reprising as the quicky and captivating Audrey Horne in director David Lynch. Currently, there are no rumors and controversies regarding her and her career.

Talking about his body measurement, Sherilyn has a height of 5 feet 4 inches. Additionally, she weighs about 56 Kg. She has a measurement of 36-25-35 inches.

In addition, she has black hair color and blue eye color. Similarly, her shoe size is 7 (US).