Shermine Shahrivar is a German model and actress born in Iran. She is well-known for her appearance in the German TV Show, 'Traumpartner'.

Shermine Shahrivar is currently engaged to Lapo Elkann. Elkann is an Italian businessman. He is the grandson of Gianni Agnelli, the former CEO and shareholder of Fiat Automobiles.

Previously, she has been married twice. Her first marriage was with Thomas Kretschmann. From their marriage, she has a daughter named Aurelia. However, the couple divorced after just a year.

Her second marriage was with Markus Klosseck. This marriage also ended after just a year.

Other than this, she has been in relationships with Ralf Bauer, Prince Albert of Monaco, and Xavier Samuel. 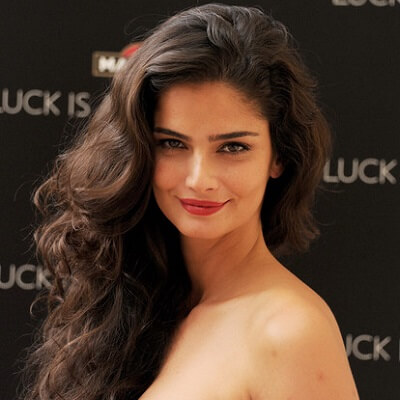 Shermine Shahrivar is a German model and actress born in Iran. She became Miss Germany in 2004 and won the title of Miss Europe in 2005.
Moreover, she is well-known for her appearance in the German TV Show, ‘Traumpartner’.

Shermine Shahrivar was born in Tehran, Iran on 17 September 1982. As of 2020, her age is 37. She was born in Iran to an Iranian family but her family moved to Aachen, Germany when she was a child.

Both her parents are Iranian. However, her father has already passed away and her brothers and mother also now live in Germany.

Talking about her education, Shahrivar attended Rheinisch-Westfälische Technische Hochschule University in Germany and graduated with a Bachelor’s degree in Political Science.

At the age of 16, Shermine was approached by a famous modeling house due to her attractive body. But, her mother rejected the proposal at that time because she wanted her to focus only on her studies.

In 2004, she entered Miss Germany and won the prestigious title. However, there was more to come. She won the title of Miss Europe in 2005 in France. After being crowned Miss Europe, she made appearances in different magazines including the American Playboy.

Besides her success as a model, she has also made appearances in TV shows. She made an appearance as the host of a popular German TV show titled ‘Traumpartner‘.

She hosted the popular show from December 2004 to August 2005. In addition to this, she has also made appearances in ‘Alarm für Cobra 11 – Die Autobahnpolizei’, ‘Deutschland tanzt’, and ‘Bambi hilft Kindern’.

On March 19, 2005, she was selected to become the host of the Oberhausen, Germany Nowruz celebration. It is the biggest Persian Nowruz concert in the world.

Furthermore, she has also made appeared in several advertisement campaigns since 2008. Currently, she is the face of American Apparel.

Shahriver has an estimated net worth of around $100k-$1 million as of 2022. However, she has not revealed her salary. An average German model receives around $150k annually.

Shermine has not been a part of any controversies in her life. She is very focused on her career and has not done anything that has harmed her image and reputation. Also, there are no rumors about her.

Shermine Shahrivar stands at a height of around 5 feet 8 inches. Similarly, she weighs around 54 kg.

Her body measurements for breast, waist, and hips are 35-25-35. She has black hair and brown eyes.

She is active on social media sites. She has around 134k followers on Facebook.

You may also like to read the Bio, Career, Body Measurements, Net Worth, Relationships, and more of Hannah Ferguson, Oli London, Bella Hadid, and more.