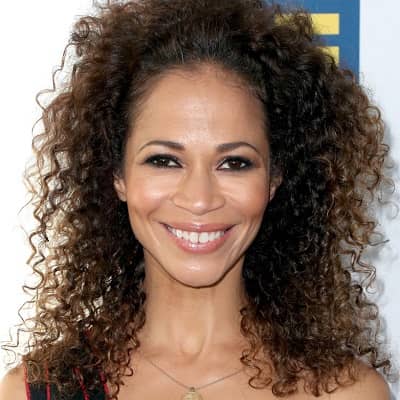 I'm always inspired by people who choose to do what is right, not what is easy.

We love you no matter what because you're you.

Cause the thing is, if you're taught to hide what makes you different, you can end up feeling a lot of shame about who you are, and that's not ok.

Sherri is married to Kamar de Los Reyes. She met her husband, Kamar on the sets of One Life to Live in the year 2001. After dating for a few years, they got married on May 26, 2007.

Sherri and previously in a relationship with Timothy Adams. They first met each other at a producer’s office when they were waiting for the results of a casting call in 1996. The couple started dating afterward working together. They split in 2003.

Who is Sherri Saum?

Sherri Saum is an American actress, model, and producer. She has popular for TV roles in Beggars and Choosers, Rescue Me, In Treatment, Sunset Beach, and One Life to Live.

Sherri was born on October 1, 1974, in Dayton, Ohio, USA. She is biracial. Sherri has African American descent from her father and Caucasian (German) from her mother.

Her mother’s name is Lois Saum. And her father’s name is not known. Sherri has a brother Michael, and a sister Dr. Lisa Saum, who is a political scientist. They were all raised by their single mother. The family wasn’t financially strong and Sherri was involved in various works from her teenage.

Sherri first studied at Ohio State University for one semester, and later transferred to New York University. She got a major in psychology. While she studied in New York she also did modeling work and worked as a waitress.

After getting her Bachelor’s degree, Sherri planned to study Criminal Justice at John Jay College. But she receives an acting job offer and later quit school.

Sherri started modeling during her summer breaks. After moving to New York she works as a full-time model in New York’s modeling agency named Image Management. Sherri debuted in acting as Vanessa Hart from the NBA daytime soap opera, Sunset Beach from 1997 to 1999.

Soon after its end, Sherri was cast as Casey Lennox in the Showtime comedy-drama series named Beggars. Likely, Sherri then appeared as Keri Reynolds in ABC’s One Life to Live which gained her much popularity.

Followingly she has worked for various series. She is popular for playing Natalie in the FX Drama Series Rescue and as Bess in HBO’s In Treatment. She was then cast as a lead role in ABC’s drama pilot Grace in 2011 and as Jennifer Lopez’s production, The Fosters.

She has amassed a net worth of around $5 million from her acting career.

An actress in the USA typically earns between $47,701 and $70,701. And so Sherri also must have a good earning from her career.

The actress hasn’t involved in any such activities that cause any buzz in the media. Likely, she also hasn’t faced any rumors or controversy yet.

She has dark brown colored hair and eyes. Talking about her body measurements, it is 33-25-34 in. She wears 2 (US) size dresses and 9 (US) size shoes.