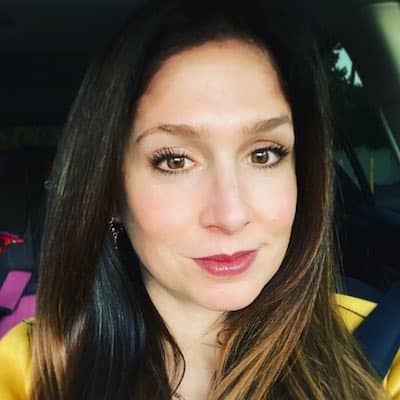 Shoshannah Stern is currently living a married life. She is married to a guy named Ricky Mitchell and they exchanged vows on 03 June 2012.

Who is Shoshannah Stern?

Shoshannah Stern is an American differently-abled actress. The public noticed her for appearing in Jericho (2006), The Hammer (2010), This Close (2018), and more.

Recently in 2020, her upcoming project titled The Magnificent Meyersons is under post-production.

She was born Shoshannah Oppenheimer Stern on 03 July 1980 in Walnut Creek, California, the USA. The name of her mother is Hedy Marilyn Stern and her father is Ron Stern.

Shoshannah’s ancestry is Jewish and has two siblings. Her sister Louise Stern is a writer/artist and her brother Brendan Stern is a political scientist.

She was born with hearing loss and is a fourth-generation child. Though she is deaf, she can understand by reading the lips of people and also she can talk in English fluently.

As per her academics, she first attended the California School for the Deaf. Then she enrolled at Gallaudet University which is an art college for the deaf.

Shoshannah Stern started her career as a girl in a movie named The Auteur Theory in 1999. She was then seen in brief roles in Off Centre, ER, Boston Public, The Division, and more.

But her characters in Threat Matrix as Holly Brodeen and Jericho as Bonnie Richmond increased her fame. Her other notable TV series and characters are,

At present, from her career, her estimated net worth is around $500k US. However, her salary and other earnings are unknown.

This amazing actress is keeping herself away from rumors plus desperate scandals.

Regarding Shoshannah Stern’s body features, her height is 5 ft 2 & half inches and her body weight is 55 kg.

Moreover, her eyes are brown and her hair color is dark brown. She has a fair skin complexion.