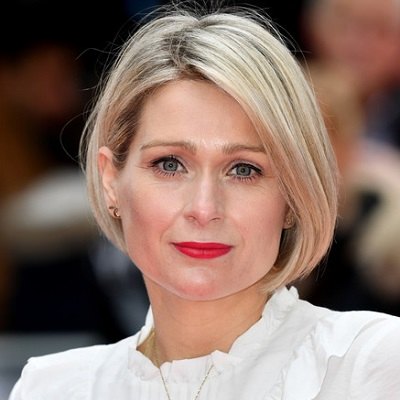 On Sherlock: It's so exciting. It's just the most unbelievable show, the highest quality, so much care and love. It is just a dream come true.

What is the relationship of Sian Brooke?

Sian Brooke is happily married to Bill Buckhurst. Her husband, Bill is an actor and theater director.

As of now, she has not shared any details on her wedding and dating details. Together, the couple is blessed with two children.

However, being a protective mother, she has not disclosed the names of her children.

Who is Sian Brooke?

British Sian Brooke is an actor and theater artist. She is renowned as Elizabeth of Sherlock, Ophelia of National Theatre Live: Hamlet, and Lori of Cape Wrath.

Last, in 2020, she appeared in the movie, Body of Water as Stephanie.

She happens to the youngest child of his parents. Her father happens to be a police officer whereas her mother is a teacher by profession. She has three siblings.

She completed her elementary education from The Friary School in her hometown. Since childhood, she was in love with the performance. She was just 11 years old when she joined the National Youth Theatre.

Later, she joined the Royal Academy of Dramatic Arts to be trained as an actress. In 2002, she graduated from the academy.

Soon after graduation, in 2002, Sian Brooke made her acting debut with the series, Dinotopia. In the family fantasy, she appeared in the character of the Krista.

Through the series, she shared the screen with the actors like Michael Brandon, Jonathan Hyde, and Georgina Rylance.

Following the series, she appeared in the series like All About George, Under the Greenwood Tree, Housewife, 49, and Foyle’s War in some supporting roles.

After that, she featured the series like Hotel Babylon and Cape Wrath as the lead of the series.

In 2019, she featured the series, Good Omens based on the same novel written by the author, Neil Gaiman. Following that, she also appeared in the series, Trying as Karen.

Besides series, she is also popular for her movies too. In 2013, she made movie debut with the film, The Scampi Trail as Nuss Liquor.

In 2019, she featured the movie, National Theatre Live: Hamlet as Pauline Gibson which happens to be one of the milestones in her acting career.

Last, in 2020, she appeared in the movie, Body of Water as a lead, Stephanie.

Apart from being an actress, she is also a repeated theatre artist. She started her theatre career with the play, Just a Bloke as Lisa in Royal Court Theater.

The list of her famous plays includes Romeo and Juliet, A Midsummer Night’s Dream, The Birthday Party, and Hamlet. In 2018, she gave her latest performance at the National Theatre at the play, I’m Not Running as Pauline.

Sian Brooke has blue eyes with blonde hair. She stands at a height of 5 feet 6 inches and weighs around 65 kg.

As of now, she has not been through any sort of controversy and scandal that created a buzz in the media. Besides that, she has also maintained a distance from any type of rumors.

You may also read the bio of Chris Santos, Alden Ehrenreich, and Lily Tomlin.