Sierra Egan is in an open relationship with her boyfriend Roman Palumbo. He is a professional photographer as well as a known social media personality.

The couple has been together for 5 years. The couple got to know each other through their mutual friends. They had a crush on each other later they met for the first time.

It was during their school days.

The couples are active on YouTube and are seen uploading or posting videos related to vlogs, travel videos, Q&A’s, shopping hauls, pranks, challenges, and others. 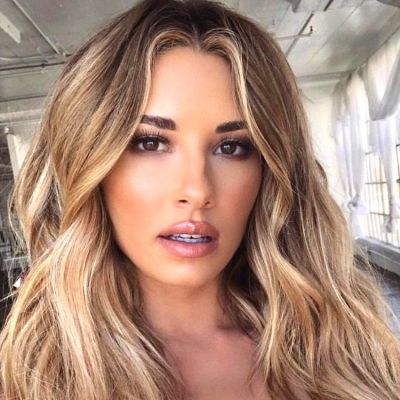 Who is Sierra Egan?

She is known after collaboration with Eoverlite Model Management and has been sponsored by the Boutine Los Angeles, Plumeria Lingerie, and other famous clothing brands.

Sierra Egan was born in Los Angeles, California, United States on November 6, 1995. As of 2022, she is 27 years old and holds American nationality.

She belongs to Italian and Native American descent. The birth zodiac sign of Egan is Scorpio. Her birth name is Rebecca Vuxta whereas she has the nickname, Sierra Skye.

The model has not revealed much about her family and siblings.  She has a sister whose identification is not clear to the media yet. She was raised in the Malibu region of the state.

She went to one of the private schools in the United States where she completed her high school level.

uring school days, she used to be active be in various school competitions as well has won many prizes and awards. She was even a cheerleader during her school time.

After completing her high school level, she joined the California State University located in the Channel Islands with a major in nursing.

Though her course was four-year oriented, she drop out of the university after two years to continue her modeling career furthermore.

In the summer of 2015, Sierra started her career through the internet. At first, she uploaded her pictures with her pet which was a kitten. After that, she continued to share her pictures in different outfits including bikinis, dresses, and so on.

Egan came in the eye of modeling scouts, who are always searching for new models on Instagram. In 2016, she got covered in her first photoshoot with Boutine Los Angeles, which gained her a lot of popularity.

Later, She collaborated with Eoverlite Model Management, Miami after which she worked as a professional model for national as well as international fashion brands.

Now, she is known as a swimsuit model as well. She has been sponsored by Plumeria Lingerie and other famous clothing brands.

Various music-related events, as well as fashion shows, have been attended by her which includes Coachella Valley Music and Arts Festival.

Being a successful rising star, Sierra Egan’s net worth changes year to year. As per sources, the net worth of Sierra Egan is estimated to be 1 million USD.

It is known that she is paid  $200 and $330 per picture she uploads onto her  Instagram account. Though, her salary and monthly income are unknown to the media.

Sierra Egan is busy focussing on her career. So, she is miles away from the rumors and controversies up to date.

Sierra Egan has impressive body statistics with measurements of  36-24-37 inches, as she stands at the height of 5 feet 6 inches and weighs around 59 kg. She has an hourglass body type.

She has a fair complexion blonde hair and a couple of brown eyes. She has a chiseled jawline.

Similarly, Egan and her boyfriend also have a Youtube channel which they launched on 30 June 2015 and has over 40.5 K subscribers.