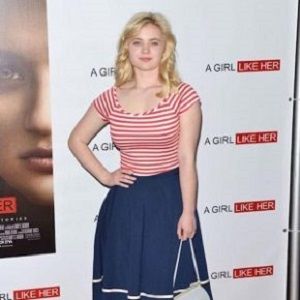 If I'm at a party, I can put on some crazy dance moves. However, it's not synchronized, beautiful or choreographed like a ballet dancer. I'd love to be graceful like that

I took a psychology class, and I think the study of the mind can help me further my acting ability. It's also taught me about getting into an environment with new people and acting like you've known them forever

There are some subjects in school that I love, but it can still feel like a chore. Acting never feels like a chore.

Sierra is a young, beautiful and talented actress. Her elegance and beauty have attracted the interest of lots of attention of males. She has without a doubt, hundreds and thousands of admirers. This actress was once linked with her co-star Jake Short. This affair was started in Feb 2014 but ended in July 2014.

We don’t have any concrete information on her relationship status as per now. Even if she’s dating anyone, it is not known to the public yet. She likes to keep things quiet and under the radar.

Who is Sierra McCormick?

North Carolina-born Sierra McCormick made her debut appearance on TV in 2007 in “’Til Death” and game show, “Are You Smarter Than a 5th Grader?”.

Presently, she is popularly known for her roles as Scout Thomas in “Romantically Challenged” and Olive Doyle in “A.N.T. Farm”. She also made a guest appearance in the music video of the song “Dynamite” in 2011.

Sierra McCormick was born on October 28, 1997, in the city of Asheville in the state of North Carolina. She possesses American nationality and her ethnicity is unknown.

As per her education, there is no information regarding the institutions but she is a graduate.

Sierra initiated her acting career from a young age. When she was 9 years old, she made her screen debut as a kid on the TV series “’Til Death”. This was after she joined The Corsa Agency in Los Angeles in 2006. From 2007 to 2008, she appeared on “Are You Smarter Than a 5th Grader?”. This boosted her career on TV. Consequently, she was offered a lot of roles in TV series and films.

Sierra McCormick reprised the character of Olive Doyle in it from 2011 to 2014. Later in the year 2015, she appeared in the movie Some Kind of Hate as Moira. Sarah has also made Guest appearance in the music video Dynamite in the year 2011. Similarly, she made her appearance as Sarah in the 2016 television films, Sorority Nightmare.

Sierra McCormick: Salary and Net Worth

Previously in 2016, there were rumors that she was dating an unknown guy. The same year the rumors of their break-up surfaced the social media too. Presently, she hasn’t been part of any media controversies and avoids media tittle-tattle.


Sierra McCormick has a height of 5 feet 2 inches. Her body weighs 55kg. Besides this, she has blonde hair and blue eyes. Furthermore, her body figure measures 36-27-35 inches. Her bra size is 32D, shoe size is 8US and dress size is 10US.