Sigourney Weaver married to stage director Jim Simpson on October 1, 1984. They gave birth to Charlotte Simpson on April 13, 1990. They have been living a happy life together. 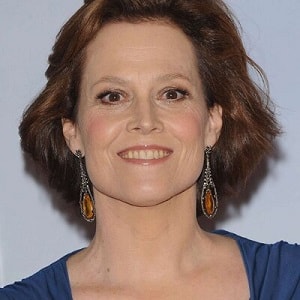 "I'd love to tell actors about all the things they don't need to worry about. Less is more. If you have it inside, you don't need to show too much. People pick up on things."

Who is Sigourney Weaver?

Sigourney Weaver, whose original name is Susan Alexandra Weaver, is an American actress and film producer. Her remarkable performance in ‘Aliens’ earned her a nomination for the Academy Award for Best Actress in a Leading role in 1987. She has been nicknamed ‘The Sci-Fi Queen’ by Hollywood for her portrayal of different characters in various science-fiction films

She was born on October 8, 1949, in Manhattan, New York City. Her father’s name is Sylvester L. Weaver Jr. and her mother’s name is Elizabeth Inglis. Her ethnicity is a mix of English, Scottish, and Dutch. Her father was a TV producer and her mother was an actress who left her career in acting for the sake of her family. Her zodiac sign is Libra.

She enjoyed a comfortable childhood and she was raised by many nannies and maids, and by 1959 her family had resided in 30 different households.

She attended her school Ethel Walker School in Connecticut. She joined the Chapin School and the Brearley School in 1961. She was often mocked by her friends because of her tall height.

She attended Sarah Lawrence College in Israel and she graduated from Stanford University with a B.An in English. She completed her master’s degree in Fine Arts from Yale University School of Drama in 1974.

She debuted her career in 1977 with the movie ‘Annie Hall’ even though her role was short. She earned the role of Ellen Ripley in the blockbuster movie ‘Alien’ and became a huge hit. She starred in ‘The Years of Living Dangerously, ‘And gorillas in the Mist in 1988.

She was nominated for an Emmy Award, Golden Globe Award, and Screen Actors Guild Award for her first TV movie ‘Prayers for Bobby’ in 2009 where she played the role of Mary Griffith.

Weaver has done her voice-over work for blockbuster movies like ‘Wall-E’, and ‘The Tale of Despereaux’. She was also seen in the Spanish thriller film ‘Red Light’ in 2010. James Cameron revealed that she will be playing her role in ‘Avatar’.

She played in the sci-fi movie ‘Chappie’ in 2015 and in the same year, she was offered the famous sci-fi movie ‘Alien’, and Weaver would be representing her role as Ellen Ripley. She played the role of Alexandra Reid, the female antagonist, in the movie ‘The defenders.

She has been nominated for the Academy Award four times for her outstanding roles. She was awarded Best Supporting Actress in 1997 for the movie ‘The Ice Strom’ and she won Golden Globe Awards for Best Actress for ‘Gorillas in the Mist and Best Actress in Supporting Role for ‘Working Girl. She has also been awarded the Glamour Woman of the Year Award in 2002 and Glamour Award for Icons in 2016.

Sigourney Weaver: Net Worth and Salary

As of 2022, it is expected that she has got a net worth of $60 million and her salary is still under review. Her main source of income is from Film, Television, Video Games, Documentaries, etc.

There was a controversy among the LGBT (lesbian, gay, bisexual, and transgender) community for using surgery as a sensational plot device. Weaver replied by saying no one was demeaned or denigrated.

To know more about the early life, family, education, profession, net worth, body measurement, and social profile of Shannon Elizabeth, Angel Locsin, and John Hurt please click on the link.