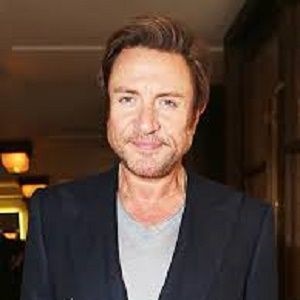 I feel sorry for the '90s, because it was never able to be anything much more than the hangover to the party that was the '80s.

We want to be the band to dance to when the bomb drops.

That was the whole point in forming a band. Girls. Absolutely gorgeous girls.

In discussing his relationship, he is a married man. Before marriage, he was engaged to his then-longtime girlfriend Claire Stansfield, model-turned-actress in the early 1980s. But their relationship could not last long and got separated.

He then tied a knot with an Iranian-British model, Yasmin Le Bon on 27 December 1985 after seeing her face in a magazine and dating for a long time. The couple has been blessed with three beautiful children namely Amber Rose Tamara Le Bon (born 25 August 1989), Tallulah Pine Le Bon (born 10 October 1994), and Saffron Sahara Le Bon (born 25 September 1991).

The couple has been living a happy life with no signs of any divorce and rumors.

Who is Simon Le Bon?

Simon Le Bon is a singer, musician, lyricists,  and songwriter. He is well recognized as the lyricist and lead singer of the band Duran Duran and its offshoot, Arcadia.

A singer was born as Simon John Charles Le Bon on 27 October 1958 to his parents John and Ann-Marie Le Bon near Bushey, Hertfordshire, England.

His mother encouraged his artistic talent by sending him for a screen test in a Persil washing powder TV advert. He used to sing for a church choir during his childhood. But he had even more interest in acting. He had spent his some of the time working on a kibbutz in Israel after graduating high school.

On talking about his educational background, he attended Pinner County Grammar School. Also, he joined the same school named Nower Hill High School that his mother had previously attended.

Then he came back to England from Israel and studied drama at the University of Birmingham.

Firstly, Le Bon auditioned to join the rock group Duran Duran in 1980 started by John Taylor and Nick Rhodes. The band released its first album, Duran Duran in 1981 that was able to be famous as part of the New Romantic movement so quickly.

Moreover, the band together released three albums entitled  Seven and the Ragged Tiger (1983), Rio (1982), and the live album Arena (1984) after the great succession. Besides, Rhodes and Le Bon only stayed as the two members who had been with Duran Duran from the beginning of their recording career when bass guitarist John Taylor moved out of the band in 1997.

However, Le Bon had founded the new band entitled Arcadia with fellow Duran Duran members Roger Taylor and Nick Rhodes. In 1985, the band released a top Us hit along with their first single “Election Day”. The band then recorded another one album entitled So Red The Rose.

Furthermore, he also had dabbled in solo outings while he had been in Duran Duran for the band’s entire recording history.

On talking about his Lifetime achievements and awards, he has been entitled as SYN’s “Founder and Chairman” in current time.

Simon Le Bon: Salary and the net worth

In discussing his salary and the net worth, he earns a decent amount of salary but currently unavailable. He has an estimated net worth of $60 Million that he earns from his successful career.

Since he is able to maintain his personal life and professional life, he had not got into any controversies yet. Thus, there are currently no such records available regarding his rumors and controversy.

In discussing his body measurement, he is 6 feet and 1 inches tall. He possesses brown hair dark brown color and light-brown eye color.