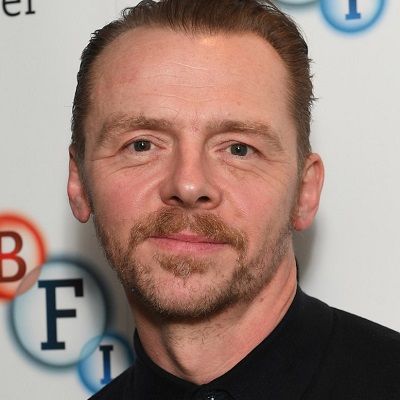 You know what, despite my complaints about The Phantom Menace and Episode II, when Episode III comes out I'll be first in line. I genuinely love it.

Every person should have their escape route planned. I think everyone has an apocalypse fantasy, what would I do in the event of the end of the world, and we just basically - me and Nick - said what would we do, where would we head?

I always loved horror and that's sort of the reason we decided to make the film. We were nourished on those sorts of films, so it was a labor of love.

Simon Pegg is a married man. He has tied the knot with Maureen McCann. She was his long-term girlfriend. They married on 23rd July 2005 and are still together.

Similarly, they have a daughter who is Matilda Pegg born in 2009.

Who is Simon Pegg?

The English actor Simon Pegg is also a comedian, screenwriter, and producer. He has appeared in Asylum, Six Pairs of Pants, Faith in the Future, Big Train, and Hippies.

Similarly, he won the British Independent Film Award for Best Screenplay in Shaun of the Dead.

He was born on 14th February 1970 in Brockworth, Gloucestershire, England. He is the son of John Henry Beckingham(father) and Gillian Rosemary(mother).

Similarly, his mother is a former civil servant and his father is a jazz musician and keyboard salesman.

Likewise, he has a brother Mike Beckingham and a sister Katy Pegg. Similarly, he belongs to British nationality and his ethnicity is English.

Likewise, he graduated from the University of Bristol in 1991 with a BA in Theatre, Film, and Television

Simon Pegg’s early appearances in TV series and films include Asylum, Six Pairs of Pants, Faith in the Future, Big Train, and Hippies. Between the years 1998 and 2004, he has regularly featured on BBC Radio 4’s The 99p Challenge. Similarly, his other credits include appearances in the World War II mini-series Band of Brothers.

After that, he played various roles during the tour of Steve Coogan’s 1998 live stage show The Man Who Thinks He’s It. In the year 1999, he created and co-wrote the Channel 4 sitcom Spaced with Jessica Stevenson.

Likewise, Pegg has portrayed the role of mutant bounty hunter Johnny Alpha, the Strontium Dog in a series of Big Finish Productions audio plays. In the year 2006, he played Gus in Big Nothing alongside David Schwimmer. In the same year, he and Wright completed their second film Hot Fuzz which released in February 2007.

Furthermore, he played engineer Montgomery Scotty Scott in Star Trek, the eleventh film in the Star Trek film series. It released on 8 May 2009. Moreover, he reprised the role in the 2013 film Star Trek Into Darkness and Star Trek Beyond also co-writing the latter.

Likewise, he won the Boston Society of Film Critics Award for Best Cast for Star Trek.

He has an estimated net worth of $25 million. Similarly, he might earn a huge amount of money from his career. But he has not shared details about his salary and other incomes.

Furthermore, he spaced his house in North London for sale at £4 million.

Simon Pegg has a height of 5 feet 8 inches and his weight is around 70 kg. Similarly, his hair color is salt and pepper and he has black color eyes.

You may also like to read Ralph Fiennes, Jamie Foreman, and Rowan Atkinson.