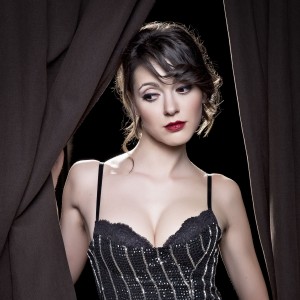 Cute and charming, Simona has able to keep her personal life so secret that nothing about her affair and relationship status is published. She hasn’t revealed any personal information in any interview too. Currently, she resides in Italy.

Who is Simona Molinari?

Simona Molinari is an Italian pop music singer and songwriter. She is extremely prominent for studio album titled “Tua”, “Egocentrica”, and “Croce e delizia”. She is a hardworking person and has made a respectable position on a singing platform and has earned more fame and fans.

Simona was born to Italian parents on 23 February 1983 in Naples, Italy. Her nationality is Italian and belongs to European ethnicity.

There is no information published regarding her parents and siblings; however; in one of her interviews she told that her father encouraged her to secure her career in the singing field.

She started singing since she was five years old and became able to sing like a professional singer at the age of 11. There is no information published relating her education background.

Simona released her first album titled “Egocentrica” in the year 2009. Her first album reached the top level of success and won ‘Lunezia Award’ in the category of “Lunezia Award “New Stars”. The album was also nominated for ‘Mogol Award’ in the category of Best Lyrics in 2009. She also released her single titled “Nell’aria” in the same year (2009). Next year (2010), she released another album titled “Croce e delizia” and one single titled “Amore a prima vista”. Her two singles titled “Forse” and “In Cerca di te” was released in the year 2011. In the same year, she released her third album titled “Tua”. Her fourth album named “Dr.Jekill, Mr. Hyde” was released in 2013. In the same year, she released her two singles titled “La felicità” and “Dr.Jekill, Mr. Hyde”. In the year 2010, she won two awards including ‘Wind Music Awards’ in the category of ‘Special Award FIMI-PMI-AFI for Best Young Talent’ and ‘Lunezia Award’.

Simona Molinari: Salary and Net Worth

It is said that she makes handsome amount of money; however, her net worth is not published yet.

Despite being a popular singer, there are no desperate rumors regarding Simona’s personal and professional life.

It seems like she is doing her best work without harming other for which she hasn’t been a part of controversy yet.

Simona has dark brown hair and black eyes. Furthermore, there are no details regarding her body measurement.