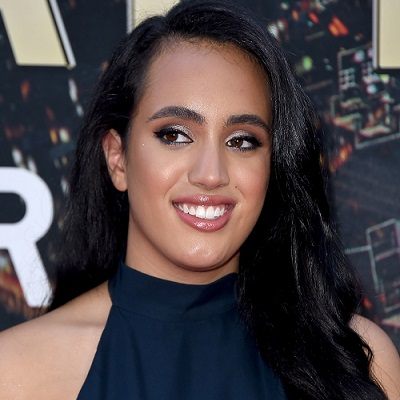 Simone Alexandra is neither engaged nor dating. She like to maintain her personal life as a mystery for the public. Hence, she has not shared any information about her previous relationships.

As of now, Simone is focused in her career as a wrestler.

Her Instagram posts suggest that she likes to spend her free time with her friends. Also, she has a soft corner for dogs.

Who is Simone Alexandra?

American Simone Alexandra is a model. She is renowned as the daughter of the legendary wrestler, The Rock.

She is also a professional wrestler.

Her father, Dwayne Johnson is a wrestler and actor. Johnson is famous for his ring name The Rock. Her mother, Dany Garcia is an entrepreneur and producer by profession.

She happens to a single child from her parents. However, she has two step-siblings, Tiana Gia Johnson and Jasmine Johnson for her father’s side.

Not only her father, her grandfather, Rocky Johnson was also a wrestler. Besides that, her great grandfather, Peter Maivia happens to the professional wrestler.

That makes her the fourth generation of the wrestler’s family.

Talking about educational background, she is a High School graduate. However, she has not shared any details about her High School.

Simone Alexandra instantly came in limelight instant during her early career. She started her career as a model for the modeling agency, IMG Models. After the modeling contract, she parted her ways with the modeling world. However, she was always in the headlines for making her appearances in the red carpet along with her father.

Moving towards, she also became the brand ambassador for the Golden Globe Awards back in 2018.

As of now, she is following the footprints of her father, grandfather, great grandfather, and carrying the legacy of the family as a wrestler. Currently, Alexandra is being trained for her for the WWE Performance Centre in Orlando, Fla.

When the matter comes to net worth, her father is the richest member of the family with an estimated net worth of $320 million. Back in 2015, The Rock happens to the richest wrestler in the world with a net worth of $75 million.

Till the date, she has never faced any kind of controversy that created news in the media. Besides that, there are no rumors related to her.

However, her family came in the spotlight back in 2008  when they got divorced. At that moment also, she managed to keep her calm.

Simone Alexandra is a brown-eyed brunette. Her height is 5 feet 10 inches and weighs around 55 kg. Her body measurement is 33-24-34.

Talking about the appearance, she has a sharp look with diamond shape facial structure. Also, she prefers to experiment with her hair from the long to short and black to light brown.