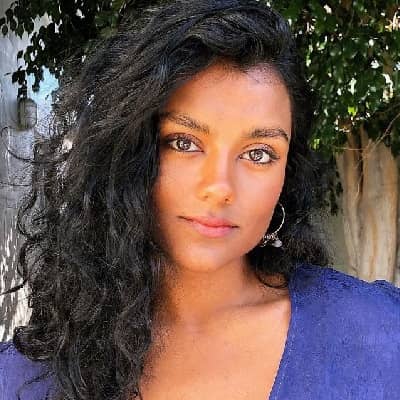 Simone Ashley at present is possibly single. She has not disclosed details of her current boyfriend or affair.

Who is Simone Ashley?

Simone Ashley is a British actress. She is known for her appearance in Sex Education (2019), Broadchurch (2013), and Pokémon Detective Pikachu (2019).

Her upcoming short video Bulldog is under post-production. Recently, she made the news for being the lead female in season 2 of Bridgerton.

She was born on 30 March 1995 in England, the UK. The names of her father, along with her mother, are not disclosed.

Simone’s ancestry is Indian-English but her academics are also behind the curtain.

Simone Ashley is associated with the entertainment industry. She has appeared in several screen projects.

In 2017, she made her debut with a TV show named Wolfblood. There she played the character of Zuhra for two episodes. Then she has seen in Guilt, Broadchurch, C.B. Strike, etc.

She got famed for being a part of the hit series Sex Education (2019). Her character of Olivia is loved by the audience. The other casts of this show are Asa Butterfield, Gillian Anderson, Ncuti Gatwa, and more.

Some other acting credits of Simone are,

She has earned a net worth of $500k (estimated) at present. However, her salary and other earnings are unknown.

This actress is keeping herself away from rumors and also not surrounded by any desperate scandals.

Regarding Simone Ashley’s body features, her height and her body weight are not known. Moreover, her eyes are light brown and she has black hair.