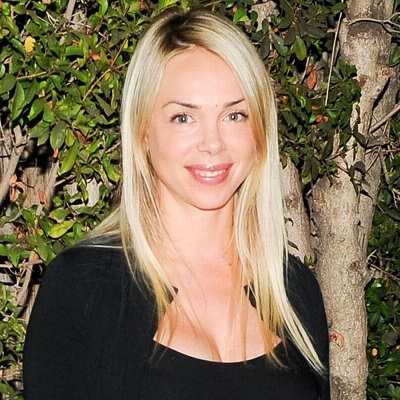 Simone Harouche is married to Marc Bretter. Her husband, Bretter is a real estate agent by profession.

The couple married in 2010 in her parents’ house in Los Angeles where she has spent her most memorial moment as a child. The wedding ceremony was arranged by Marc’s grandparents.

In the ceremony, Marc wore her mother’s wedding ring. The couple is having a wonderful time with each other enjoying every hardship and happiness of life.

Together, the couple is blessed with two children that include a son, Azlan Bretter and a daughter, Dashiel Bretter.

Currently, her Instagram posts suggest that the couple is enjoying the childhood of their children as a parent.

American Simone Harouche is a Professional Fashion Stylist. Harouche is named as the top 25 most powerful stylist.

She is also the founder of the clothing line business, KiT Undergarments.

Simone Harouche was born on the 8th of March 1980 in Los Angeles, California. Her mother, Kathy Harouche is of British ancestry.

She has a sister, Nicole Harouche. Nicole is also a hairstylist by profession.

Later, in 2001, she completed her education from Parsons School of Design. The same year, she joined the University of California.

Later, she graduated in 2003 with Honors in Communication and Media Studies.

– After graduating from the university, she started her career as a Fashion Stylist for The Only Agent. For the company, she has linked with the celebrity like Miley Cyrus, Kim Kardashian West, Nicole Richie, and Jennifer Lopez.

– In between, she made her appearance in the movies and TV special like 2005- Wassup Rockers and Taradise, and 2015- Prismatic World Tour.

– In September 2017, she started her own clothing line business venture, KiT Undergarments. Following that, in 2018, she left The Only Agent as a fashion stylist.

As one of the most powerful fashion stylist in Hollywood, her salary might be higher than the range also.

Apart from that, she also earns from her successful business venture.

In 2016, she made a headline in the news along with her High School BBF Kim when they were in the Parsis. In the hotel, Hotel de Pourtalès complex the best friends witness the most dreadful event of their life.

Her friend, Kim was at the gunpoint where she was begging for her life. Later, Kim tied up by the robbers with tag and left in the marble tub.

At the time, Harouche hid in the bathroom and make a call to the bodyguard, Pascal Duvier. However, there is a controversy that Simone raised the alarm after Kim’s scream for help.

In the robbery, robbers escape with the engagement ring of Kim that worth £3.5 million that is equivalent to $4.48 million, 2 smartphones and cash. After the incident, she returned to her home in Los Angeles.

She a brown-eyed blonde. There is no information about her height and weight.

She is active on Instagram with the handle, Simoneharouche with 209k followers.