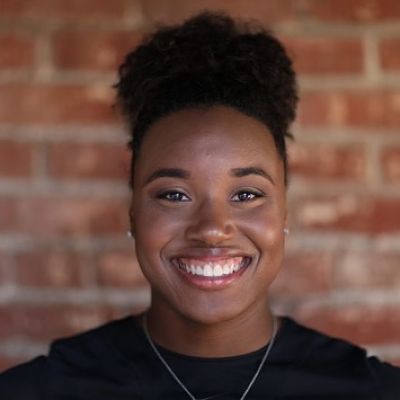 Talking about her love life, Simone Manuel is in a relationship with Denzel Franklin and introduced him on social media in 2017. They studied together at Stanford University. She has posted some photos along with him on her Instagram.

Moreover, Simone seems to be very private in nature and has not shared her relationship or affairs news with the public.

Who is Simone Manuel?

Simone Manuel is a well-recognized American competition swimmer with expertise in sprint freestyle. Manuel is widely famed as the first African-American woman to win an individual Olympic gold in swimming and set an Olympic record and an American record.

Simone Manuel was born on 2 August 1996. At present, her age is 24 years old. Likewise, her birthplace is Sugar Land, Texas, the USA.

Simone is the daughter of her father, Marc Manuel whereas her mother is Sharron Manuel. Moreover, she has two brothers as well named, Chris and Ryan.

Talking about her nationality, Manuel holds an American identity whereas her ethnicity is African-American.

Simone participated in the 2012 United States Olympic Trials and ended at 20th in the 20-meter freestyle and 17th in the 100-meter freestyle events. Likewise, she became a member of the Standford Cardinal women’s swimming team. She broke the school records in the 50-,100-, and 200-yard freestyle in the same year.

As a senior swimmer, Simone won the Honda Sports Award as the nation’s best female swimmer as well the Honda Cup for the best overall female collegiate athlete. She also won a silver medal in the 4*100-meter freestyle relay.

She also signed a deal with Tyr Sport, Inc, an American manufacturer with fellow Stanford teammates Katie Ledecky and Lia Neal in 2018.

Simone has never been part of any controversial matter or rumors till now. The athlete has been preoccupied with her professional and private life.

It seems that Manuel prefers enjoying her personal life and does not want to merge it with her professional life.

24 years old superstar, Simone Manuel has gorgeous looks and an admirable personality. She stands at a height of 5 feet 10 inches. Also, she has a balanced bodyweight of 67 kg.

Furthermore, Manuel has brown eyes whereas her hair is black. Her body measurement is 34-24-35 inches(chest-waist-hip) respectively.

Regarding her social media presence, Simone Manuel is an active personality on social media. Simone has more than 185k followers on her official Instagram account @swione.

She is also active on Twitter with around 111k followers.

Moreover, Manuel is also available on Facebook with nearly 83k fans and supporters.