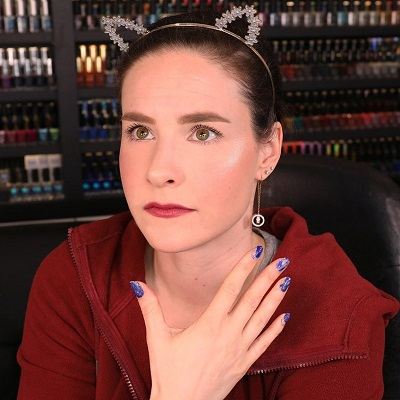 Simply Nailogical is in a relationship with Benjamin Mazowita. Her partner, Benjamin is an Instagram Star. He often makes his appearance on her YouTube channel.

The couple started their relationship since 2012. As of now, the couple is leading a happy life with her boyfriend.

Who is Simply Nailogical?

Canadian Simply Nailogical is a YouTuber, cosmetics entrepreneur, and crime analyst. She is renowned for her nail art tutorials that went viral on YouTube.

Simply Nailogical was born as Cristine Raquel Rotenberg on the 17th of October 1988 in Richmond Hill, Ontario. She is of Jewish-Germanic ethnicity. As of September 2020, she is 31 years old. Also, her zodiac sign is Libra.

Till date, she has bot shared any details on her family background including father and mother. She has a sister, Jenny.

Talking about her education, she is a graduate of Carleton University in Ottawa. In 2014, she earned a master’s degree from the University with Honors in Sociology with a major in Criminology.

The subject of her master’s thesis is self-injury in prisoners and prison conditions.

Simply Nailogical started her career as a child actress. In the ’90s and early 2000, she was active in the various commercials. However, she gave up her career as an actress to focus her studies in school.

Currently, she happens to be a government employee. For a government agency, she produces statistics to help a better understanding of the country’s population, resources, economy, society, and culture.

Apart from being a government employee, she is widely renowned as a YouTuber. On the 5th of June 2014, she created her YouTube channel. Later, she uploaded her first video on the 18th of June. In the initial days, she used to upload Later, she started adding voices in such videos. Eventually, she started making nail art tutorials.

Her YouTube video got famous for applying 100 coats of nails polish that started the trend of applying 100 coats of various things. Within no time, her YouTube videos went viral as they were copied by the YouTubers like Jenna Marbles. In 2016, her videos became trending on YouTube. Currently, her main YouTube channel has around 7.67m subscribers with more than 1.66 billion views.

Apart from being a YouTuber and Podcaster, she happens to be a cosmetics entrepreneur. In 2019 she launched her nail polish line called Hola Taco. Before launching the polish line, she launched her prototype polishes that got sold out within two hours.

Besides that, as a podcaster, her earnings are $87k or above. Also, she earns through her blogs and collaborations and a business venture, Holo Taco.

Till the date, she has not been through any sort of controversy and scandals that created a buzz in the media. Besides that, she has managed to maintain a distance from any sort of rumors.

Simply Nailogical has brown eyes with brunette hair. She stands at a height of 5 feet 4 inches and weighs around 50 kg.

You may also read the bio of Jackson Mecham, Kate Elizabeth, and Dominic Toliver.