Singer Alesha Dixon, 40 is pregnant with her second child! 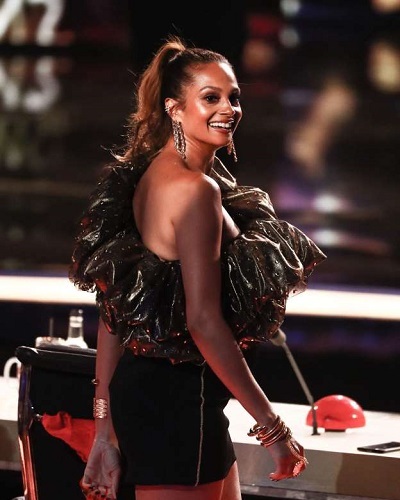 Update: Alesha Dixon became a mother for the second time on 20 August 2019. She gave birth to a baby girl named Anaya Safiya Ononye.

Alesha Dixon and the pregnancy news

Alesha Dixon has been on ITV’s show BGT since 2012. The show presenters Ant McPartlin and Declan Donnelly announced Alesha’s pregnancy at the beginning of the show.

She said that she was very happy and over the moon. She disclosed that she would be happy to celebrate this great news by firing the show’s live semi-finals. The show is taking place in London’s Hammersmith Apollo.

The show’s crowd and the audience were also elated. She has a prominent baby bump which was clearly visible in her form-fitting back mini dress with a conspicuous gold frill. But she did not reveal the due date for delivery.

Alesha’s fans and social media followers were thrilled and thronged the platform to wish her congratulations. One commented:

“Ant and Dec have just revealed on #bgt that #aleshadixon is expecting her second child.”

Some even joked about her dress saying that she looked like a celebrations wrapper.

Alesha Dixon and her husband and kids

Alesha, 40 is not married. She has a boyfriend whose name is Azuka Ononye. The couple has a daughter who is five and named Azura. Alesha announced the birth of her first daughter on 7 October 2013 which was also the day of her 35th birthday. She had said:

“Thank you for all of your lovely birthday messages! I’ve had the best present in the world…

“My baby girl! Azura Sienna was born last week!!! I’m elated and over the moon.”

Click to read more about the Singing sensation of BGT 2009, Susan Boyle: Where is she now? What is she doing? Know the latest about her!

Recently the singer revealed that she is desperate to have another baby but had thought that it is unlikely and may not happen. She spoke to You magazine and said:

“Not a day goes by without me longing for another baby.”

“I don’t know whether it will happen given my age but I adore the idea of a large family and I hope I will be lucky.”

“The love I feel for Azura is so pure and unconditional.”

“The main thing is to enjoy her in the present and be philosophical about the future, because what will be will be.”

Click to know more about BGT promising dancer from Eclipse group confined to a wheelchair after been diagnosed with a rare condition, Postural Tachycardia Syndrome!