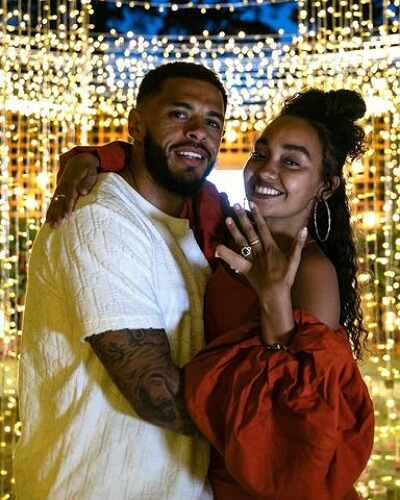 Update 2022: Leigh-Anne Pinnock and Andre Gray are now parents to two. The singer gave birth to twins in August 2021, a year after their engagement.

Leigh-Anne Pinnock and her engagement

The famous singer, Little Mix star Leigh-Anne Pinnock is elated. She shared with her Instagram fans that her boyfriend soccer player Andre Gray has proposed to her and of course, she said Yes.

Leigh-Anne, 30 put up this post on Thursday 28 May 2020 about her engagement. The British singer uploaded a photo of herself and her fiance, Andre.

She was showing off her new expensive engagement ring in the photo. She captioned it:

“Guys.. wtf has just happened… He bloody did it, and I said yes,”

As usual, it came as a surprise to her from her boyfriend. Leigh-Anne also posted more photos of the occasion. She went on to add:

“I’m marrying my soul mate, the man of my flipping dreams…I am lost for words, so I think I’m just going to go cry some more. “@andregray_ I love you so much. My world is literally complete.”

Andre also posted the news on his Instagram and the caption read:

“Let the caption speak for itself this time…Hasta la muerte.”

He put some Spanish words in his caption which means that we will be together until death.

The couple’s strong chemistry and bond

Leigh-Anne Pinnock has ever been vocal about her intense desire to marry Andre Gray at the earliest. Andre plays for the Watford Football Club in the English Premier League.

Also, read Little Mix’s Jesy Nelson tried to commit suicide after she and her bandmates were horrifically trolled after their instant fame on X Factor 2011!

She also revealed that they were unable to go ahead and get married since she was busy with her touring and music recording schedules. She told:

“If I wasn’t in Little Mix we probably would have started planning already. We’re both really excited so when the time comes, then yeah, we’ll be ready.”

Just before the proposal, Leigh-Anne had uploaded a picture of the two on a white sand beach and captioned it:

“Happy Anniversary baby… how has 4 years gone so fast! All I know is I’m another year more crazy about you. I couldn’t love you harder if I tried.”

Congratulations to the couple

Little Mix band assembled on the X-Factor. Simon Cowell had formed it. Her bandmates are Perrie Edwards, Jade Thirlwall, and Jesy Nelson. They were the first to send their best wishes to her for this occasion.

“My heart is so happy. I absolutely adore you both! YOU. HAVE. A. FIANCÉ, Congratulations to a dream coming true and @andregray_ getting the most amazing girl in the world!”

“I love you so muchhhhhh and am so happy for you bothhhhh. I gotta new brother in law y’all.”

“These pictures. Love you both you deserve the world.”

Congratulations to the couple for this surprise engagement amidst the coronavirus pandemic!