Siohvaughn Funches was previously married to her ex-husband, Dwyane Wade after a long-term relationship. Dwyane Wade is a popular former professional basketball player.

She was studying in fifth grade while she met Dwayne and started dating at the age of 15. On May 18, 2002, during their sophomore year, they tied their lifelong knot after some live-in relationship.

Thereafter, she moved to live with her husband. However, their marital life crashed after an 8-year long-married relation. They divorced on June 25, 2010.

They together had 2 children namely Zaya Wade and Zaire Blessing Dwayne Wade. However, Dwayne won full custody of the two children he shared with Funches. Currently, Funches is single. 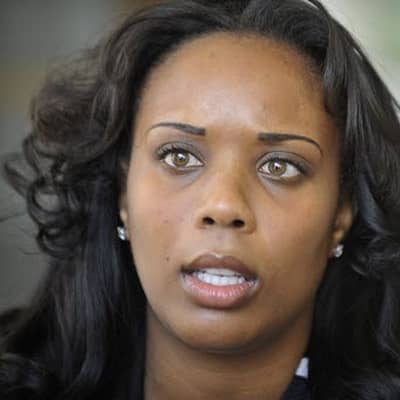 Who is Siohvaughn Funches?

Siohvaughn Funches is an American public speaker, author, counselor, and celebrity ex-wife. Likewise, Funches came into the limelight for being the ex-spouse of a former professional basketball player, Dwyane Wade.

Moreover, she is the founder and president of a non-profit organization called ‘A Woman’s Worth Foundation.’

Siohvaughn Funches was born on  September 6, 1981, in Chicago, Illinois, USA. Currently, she is 39 years old.

She was born to her father Frank and mother Darlene Funches. She grew up in her hometown, Chicago along with her sister Garrica LeAnna Woods. Her parents divorced when she was just three years old. However, she was a very much determined, talented, and hardworking person from her childhood.

Furthermore, Funches holds American nationality. Her ethnicity is All-American and she follows Christianity.

Talking about her education, Funches completed her graduation from Harold L. Richards High School situated in Oak Lawn, Illinois. Moreover, she also joined Marquette University in Wisconsin while she was living with Dwyane Wade.

Better known as the ex-wife of a former professional basketball player, Dwyane Wade, Funches also has her own identity. Siohvaughn Funches is an American public speaker, author, and counselor. Likewise, she founded ‘A Woman’s Worth Foundation’ in 2006 and serves as the president of the foundation that provides counseling services to women.
Funches is the writer of the books titled ‘The True Story For God’s Glory’ and ‘You Gotta Let God Finish!.’ Moreover, she is a good public speaker who fights against domestic violence.

It is difficult to determine her income and earnings because she barely shows herself in the media. However, she has an estimated net worth of $5 million according to online sources.

Once, she shared a huge fortune with her ex-husband, Dwyane Wade. However, Dwayne granted $5 million, their marital home, and four cars to Siohvaughn in their divorce settlement. Dwayne has an estimated net worth of $170M from his basketball career.

Funches is a very private person who barely shows herself in the media. Therefore, there are no rumors and Controversies about her.

Siohvaughn naturally has a tall height structure of 5 feet 6 inches and a good body shape with an average weight of 60 kgs. She has charming dark brown eyes and black hair with a dark skin tone.