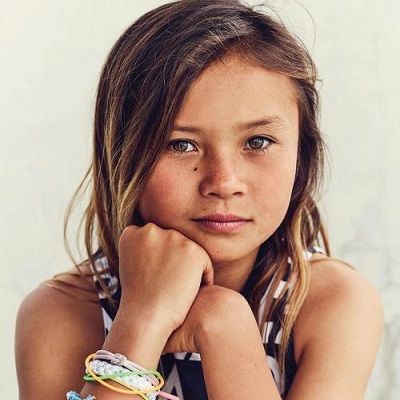 I was probably about three years old when I started,

I used to watch my dad on his all the time, I would follow him around and as soon as I could, I was on one.

Skateboarding is fun, that’s all I think about. I still don’t think to myself that is something serious. I just love it. Skateboarding is my happy place, when I’m on the board, it’s everything I want to be doing.

The Youngest Skateboarder is focused on her upcoming Olympics games.

She loves riding the skateboard. Apart from that, she enjoys surfing and traveling. She likes spending her time with her brother, Ocean.

Who is Sky Brown?

Japanese-British Sky Brown is the world’s youngest professional skateboarder. Brown is renowned for her skateboard competitions.

She is also the winner of Dancing With the Stars.

Sky Brown was born on the 12th of July 2008 in Miyazaki, Japan. Her father Stu Brown is of British ancestry and mother Mieko is of Japanese heritage.

She has a younger brother, Ocean.

– As a child, she was inspired by father to skate. Besides his father, she also followed the skateboarders Leticia Bufoni and Alana Smith. At the age of four, she started riding the skateboard following her father. First, she borrowed her father’s skateboard without permission and started riding around her home space. In a very small time interval, she became pro in skateboard.

– In 2016, she became the youngest contender of Vans US Open Pro Series in 2016. She started traveling the world in order to compete in the skateboard competition. In February 2016, she earned Gold at Simple session in Tallin, Estonia.

– After two years, she won the reality dancing show, Dancing With the Stars. In the show, she was partnered with the dancer, JT Church. Alan Bersten was the mentor for them at the show.

In 2019, she was named to be in the British skateboard team along with the team members like Alex Decunha, Sam Beckett, Alex Hallford, and Jordan Thackeray.

She has an estimated net worth of $5 million US. As a professional Skateboarder, her earnings are in the range of $12k to $120k US.

Apart from that, she also earns through a brand promotion like Nike. As the global ambassador of Polly Pocket, her average salary is $40k-$50k US.

She is a brown-eyed brunette. Her height is 4 feet and 5 inches and weighs around 47kg.

Through her Social media account, she is selling her limited edition poster of $3 dollars in order to raise funds for the non-profit organization, Skateistan.

The organization uses the fund to empower children of Afghanistan, Cambodia and South Africa through skateboarding and education.