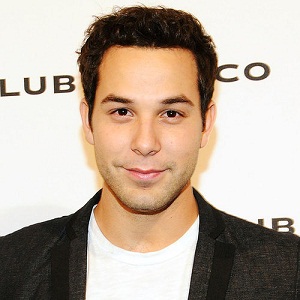 I do like to dress up and look nice, and I'm inspired by people who do the same - people who express themselves through how they dress

I'm definitely lucky to have been included in some of the perks of my brother's connections in the fashion world. It's helpful considering I'm still like a five-year-old when it comes to shopping

There are definitely times where I am listening to the radio, and I think, 'That would be awesome. I would love to sing that.' It's this weird karaoke fantasy that I might someday get to live out on the big screen.

Skylar Astin was a married person. After being in relation to Pitch Perfect co-star Anna Camp for several years, they became engaged in January 2016 and finally married on September 10, 2016.

However, this wedding ended with a divorce in the year 2019. The reason for this separation was that anna was seeing another man.

Who is Skylar Astin?

Skylar Astin is an American actor. He is extremely prominent for his role in the musical films “Pitch Perfect” (2012) and “Pitch Perfect 2” (2015).

He was born to Meryl(mother) and Barry Lipstein(father). His father is a garment industry executive. He has two brothers namely Jace Lipstein and Milan Lipstein. He has a sister named Brielle Lipstein.

Concerning his educational background, he attended Clarkstown High School North and graduated from there. Also, he attended New York University and earned a degree in arts.

He made his T.V debut in the year 2009 and appeared in “Ace in the Hole” as ‘Tod Morella’. In 2015, he appeared in the successful film “Pitch Perfect 2” for which he won the “Teen Choice Award for Choice Movie Actor Comedy”.

His estimated net worth is about $1 Million. But his salary is not disclosed.

Once there was a rumor that Astin and Anna got separated, but, afterward, the news found to be false after the couple announced that they were enjoying married life together.

Skylar Astin has a height of 5 feet 1o inches. His body weighs 74kg. He has dark brown hair and dark brown eyes.