Skylar is a WNBA player. She is married. 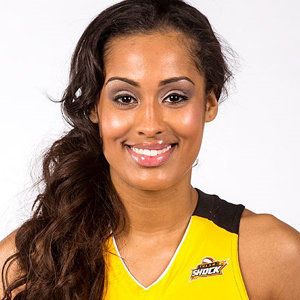 I don't think LeBron will win 5 rings, it's gonna be hard for him to catch up to Kobe.

What is the relationship of Skylar Diggins?

Skylar Diggins is married to Daniel Smith. Daniel and Skylar have known each other since their college life at Notre Dame. They got married in August 2017 at Chi-Town. We wish them happy married life.

Who is Skylar Diggins?

She has won four golds in International tournaments, a gold at the world championship, two golds at the U18 & U19, and a gold at the World University Games.

Skylar Diggins was born on August 2, 1990. Her full name is Skylar Kierra Diggins-Smith. Her parents’ names are Tige Diggins and Renee Scott. Sarah Diggins and Maurice Scott are her stepparents. Tige, Destin, and Maurice are three younger brothers of Skylar and she has a younger sister Hanneaf. She was a born athlete and played basketball from her early childhood.

Skylar attended the Washington High School in South Bend, Indiana. Her basketball skills started to develop during high school. By the time she was ready to join college, she had scored an average of 25.9 per game which is the third-highest girl’s total score in Indiana.

She then attended the University of Notre Dame in 2009. Skylar was a player on the Notre Dame basketball team. She learned serious skills and techniques while with the team Notre  Dame that paved her way for the WNBA.

Skylar’s high school basketball career flourished with Washington High School in South Bend, Indiana. In 2007, Skylar led team Panthers and won the state championship for the year. She was named all-state first team in three consecutive years i.e 2007, 2008, and 2009. On average she scored  28 points, 12 assists, 12 steals, and nine rebounds per game in her high school career.

She played for the Notre Dame rosters in her college basketball career. She was awarded Nancy Lieberman Award twice for her historical performance at Notre Dame. She scores 15.7 points, 0.6 blocks, 2.5 steals, 5.0 assists, and 3.7 rebounds on average per game during her career at Notre Dame.

Her professional basketball career in WNBA started with Tulsa Shock in 2013. Her professional career was going all so well when in 2015 Skylar suffered from a torn ACL. It took her another year to recover. She rejoined Tulsa Shock but by that time the team had relocated and was renamed Dallas Wings. With the Wings, Skylar’s performances excelled and are noticeable in her performance throughout 2017. The Wings reach the playoffs as the number 7 seed in the league all thanks to Skylar whose efforts and performance made that possible. She continues to play with the Wings to the present day.

Diggins also played basketball representing the USA. She has played at the U18 and U19 cup, World Championship, and World University Games for the USA.

So far, Skylar has been awarded 3 times WNBA All-Star, WNBA Most Improved Player, 2 times Big East Player of the year, Indiana Miss Basketball, and many others. She has also won a total of four golds for America in international tournaments.

Skylar has a net worth of 400K dollars as of 2022, while her salary details are unknown.

Some psychopaths tried to demoralize Skylar by posting fake nude pictures of the basketball star on the net. Her fake pictures got viral on the net. Skylar defended herself and denied those pictures to be real quoting it only made her stronger.

Skylar is five feet and nine inches tall. She weighs 66 kilos. She has dark brown hair and her eyes are black in color. She wears a dress size 6 (US) and her shoe size is 11 (US). Her vital stats are unknown.

Skylar is active in social media. She has more than 458K followers on Facebook, around 571.6K followers on Twitter, and a million followers on Instagram. More details on Skylar can be found on http://officialskylardiggins.com/.