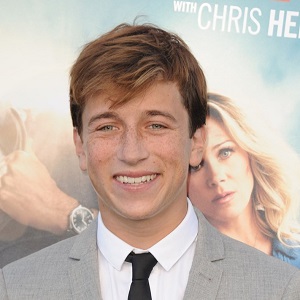 Skyler Gisondo is currently in a relationship. He is dating a girl named Ari Haagen since 2017.

They often their photos on social media. In Sep 2018, this couple shared a photo of them feeding a baby animal that was loved by their fans.

Who is Skyler Gisondo?

He was born on July 22, 1996, in Palm Beach County, Florida, US. He holds a mixed ethnicity of Italian-Ashkenazi Jewish.

His is the son of Stacey (mother) and Ron Gisondo (father) who both are engineers.

He went to Milken Community High School in Los Angeles and graduated in 2014. In 2015, he started going to the University of Southern California’s film school.

Skyler Gisondo started his career at the age of 6 in the TV profession. He was first seen in TV show Miss Match (2003) as Jeffrey.

His latest TV roles were in The Righteous Gemstones (2019) as Gideon, and Curb Your Enthusiasm (2020) as Sam.

This talented actor’s estimated net worth is around $3 million. His acted movie The Amazing Spider-man 2 (2014) has earned around $709 million at the box office.

Currently, there are no desperate rumors regarding this actor’s personal and professional life.

Skyler Gisondo has a perfect height of 5 feet 7 inches (1.68 m) but his weight is 65 kg. He has an average body with brown hair color and hazel brown eyes.