Currently, his relationship status is single. He doesn’t seem to date anyone at the moment. He remains low-key when it comes to his private life.

Also, he has not disclosed any information about his past affairs. He keeps everything secret about his as far from the tabloids. 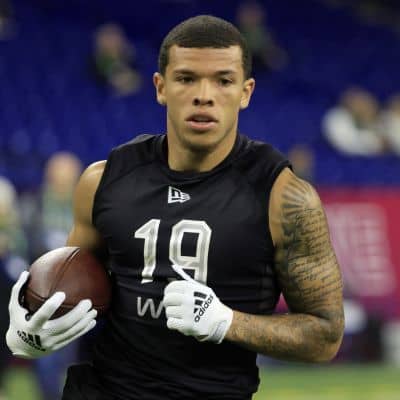 Who is Skyy Moore?

Skyy Moore is an American Footballer. Moore is a wide receiver for the Kansas City Chief of the National Football League(NFL).

In the Western Michigan Broncos college, he played football. Recently in 2022, Moore declared for the 2022 NFL Draft following the season.

He holds an American national identity and ethnicity of Afro- America. According to the Aestrologist’s birth chart, his zodiac sign is Virgo.

He has not mentioned his parents’ exact real identity but according to the other sources, he was born to Timika Hastie and Roger Moore. Besides that, there is no more information about his personal life.

Talking about his education,  in Fox Chapel, Pennsylvania he attended Shady Side Academy. He played quarterback and defensive back in high school. Later on, he committed to the Western Michigan University to play college football

He has never played the position before, after entering college he was converted into a wide receiver. Being a true freshman in 2019, Moore started 12 of 13 games and had 53 receptions for 802 yards and three touchdowns.

In 2020, he played in five games, recording 25 receptions for 388 yards and three touchdowns. Again in 2021,  he returned as a starter. He tied a school record with four touchdowns receptions against Northern Illinois.

Being an American footballer, his net worth is estimated at approximately $1million- $2million as per the sources.

Besides that, this annual salary and weekly earnings are missing.

There is no record of Skyy Moore being involved in any rumors and scandals.

Owing to his long professional career, he has not been indulged in any part of controversy yet. Moreover, he has maintained a clean image and low profile.

Sky Moore is a tall young man, whose height stands at 5 feet 10 inches and weight of 88kg. His body measurement is missing.

Further, he has black pairs of eyes with black hair