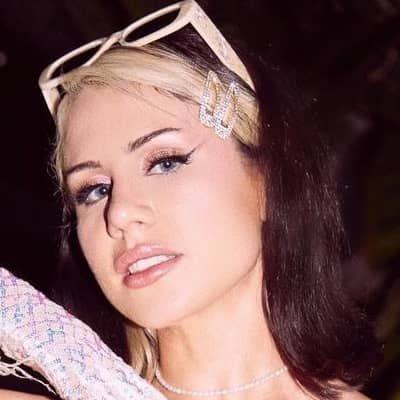 What is the relationship of Slayyyter?

Slayyyter comes up as a bisexual in March 2019 while an interview with the Gay Times magazine. As of now, she is in a relationship with a guy named Colin Martin. However, there is not much information available regarding her boyfriend.

Slayyyter is a pop singer and songwriter from the United States. She is best known for her tunes like “BFF”, Alone’, and “Mine”.

Currently, she is signed to a New York-based record label, FADER Label.

Slayyyter was born on September 17, 1996, in St. Louis, Missouri, U.S. Her real name is Catherine Slater. According to her birthdate, she is currently 25 years old. Her Zodiac sign is Virgo.

Slayyyter hasn’t yet disclosed her parent’s identity in the media. However, it is known that she has a sister. Talking about her academics background, she enrolled at the University of Missouri but dropped out after just 1 year to pursue a career in music.

She holds an American nationality and belongs to the Caucasian ethnicity.

Is Slayyyter involved in any rumors and controversies?

On January 1, 2020, Slayyyter tweeted out a handwritten note to her followers apologizing for her use of racial slurs in past tweets from 2012 and 2013.

Additionally, she said she would commit funds resulting from her CD and vinyl sales to charity organizations that support the black LGBTQ community including Sylvia Rivera Law Project and Black Trans Travel Fund.

The singer has verified social media sites. She has more than 159k followers on Instagram, 79.1k followers on Twitter, and 2k followers on Facebook. She is also active on Tiktok where she has over 52.6k followers.

Furthermore, Slayyyter has a self-titled YouTube channel with more than 51.6k subscribers. She has over 996k monthly listeners on her Spotify.

Slayyyter might have accumulated an impressive amount of wealth throughout her career. As of 2022, she has an estimated net worth of $1-5 million. There isn’t actual information available regarding her Salary, and other earnings as of 2022.

What are the body measurements of Slayyyter?

The singer stands at a height of 5 feet 5 inches tall and her weight is about 63 kg. Her hair color is dark brown but she often tends hair experiment in different colors including blonde, platinum, and silver.

She has a mole above her lips. Similarly, her eyes color is green. She has a “Star” tattooed on her left hand’s index finger.