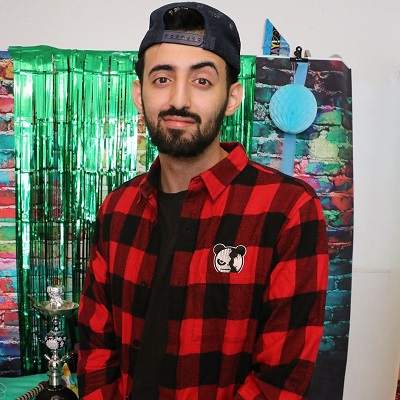 Slim Albaher is married to his longterm girlfriend, Sofia. He has not shared any details on his wedding date. However, in September 2019, he shared his wedding videos where he was taking wedding vows following the Islamic rituals of their parents and relatives.

Together, they are blessed with a son.

Who is Slim Albaher?

American Slim Albaher is YouTube Personality. He is renowned for his social experiment and vlogs that went viral on the web.

Recently, he started contents on his YouTube channel, Socially Profiled with Adam and Slim along with Adam Saleh

Slim Albaher was born on the 15th of July 1994 in Brooklyn, New York. His birth name is Sulieman Albaher. He is of Arabic ethnicity with Yemen roots. Also, he follows Islam as his religion.

Till the date, he has not disclosed any details on his father and mother. He has three siblings; Kahle, Tarekm, and Hamzah. They often featured on his YouTube videos. Also, details regarding his academics are behind the curtains.

Since childhood, Albaher liked to be the center of attraction among his friends, families, and classes. Hence, he often used to do pranks and other funny activities as his tools to be in the spotlight.

In 2012, Slim Albaher started creating content for the YouTube channel, SlimMofication Vlogs. As of now, the channel is renamed as Slim Albaher and has over 611k subscribers. The very first video of the channel was public prank videos where he was trying to scare the public.

Later, he uploaded a few vlogging videos. The channel is based on his life journey which is loaded with romance, traveling, pranks, challenges, and many notorious moments. Besides that, social experiments are also the major theme of the channel. Through the channel, he speaks against racism.

Later, he created his secondary channel, SlimMofication. Similar to his main channel, the main component of the channel is rumors and pranks. However, he no longer creates the content for the channel. He uploaded the last video on the channel on the 18th of December 2016.

Recently, he is making content for the YouTube channel, Socially Profiled with Adam and Slim. The channel is themed as a weekly podcast where they will be inviting special guests including friends, families, and other social media influencers.

Besides that, he also makes through his other secondary YouTube channels too.

Back in 2016, he shared a video that took place during his journey on the Delta Airways with the fellow YouTuber, Adam.

Later, the YouTuber uploaded the video with #BoyCott Delta.

Slim Albaher has brown eyes with black hair. His height is 5 feet and 10 inches and has a decent weight.

You may also read the bio of Wavy Jacob, Awez Darbar, and Eileen De Freest.