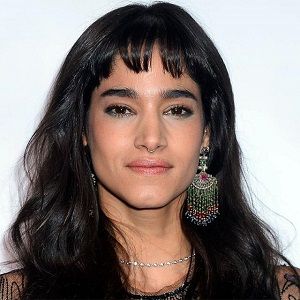 I truly believe the discipline I have honed as a dancer will bring me more opportunities as an actor.

Working with Madonna, she always told me the meaning behind the steps and why I was doing these steps--she treated us like actors. So I feel like I've always been an actor, truly.

When I was dancing, whether it was the music or the story, the question was, "Why am I doing this piece, and why am I dancing?" It is exactly the same when you are acting. You have a very close relationship with your body movement. You have to find the physicality of your character.

When I was little, I went to the Sahara Desert and met an older woman with beautiful earrings that came all the way down to her stomach. She told me, "For us Tuareg, jewelry is not meant for decoration. It absorbs negative energy that comes your way." So think twice when you buy a vintage ring!

What is the relationship of Sofia Boutella?

Sofia Boutella and singer M. Pokora were dating in 2008.

However, not much is known about their relationship. Then, Sofia met Irish actor Robert Sheehan while filming the independent film Jet Trash in Goa, India in 2014.

Sofia was a co-star and their relationship became known when Jonathan Rhys Meyers’s fiancée Mara Lane posted a snap of the two calling Sofia his lady love.

In fact, they were going steady for a couple of years, and in an interview in 2017, Robert confirmed that the two were dating. But they broke up in 2018.

Moreover, Sofia has dated her co-star from Star Trek Beyond, Chris Pine since 2017. Apparently, they attended the Coachella music festival together in April 2017, looking smitten with each other and holding hands. However, this was a short-lived relationship.

At present, Sofia is in a relationship with Keean Johnson. He is an actor and their affair was started in early 2019.

Who is Sofia Boutella?

Sofia Boutella is a popular French-Algerian dancer, model, as well as and actress.

She first received fame for representing the ‘Nike Girl’ in the Nike Women advertising campaigns and portraying a vital role in the film ‘Kingsman: The Secret Service.

Likely, she is recognized as one of the top breakdancers for her street style and ‘hip-hop’ dancing moves.

She was born in Bab El Oued, Algiers, Algeria on April 3, 1982. Her father’s name is Safy Boutella, but her mother’s name is unknown.

She also started classical dance education when she was five years old. Besides that, she started rhythmic gymnastics, joining the French national team at age 18.

She has a sibling namely, Seif Boutella. Sofia holds Algerian- French citizenship and Algerian ethnicity. Her birth sign is Aries.

Talking about Sofia’s education history, there is no information about her educational achievements.

Additionally, she also participated in ‘Chienne de Vie and Aphrodites’, a group created by Momo from the ‘Vagabond Crew’. Then, she also started to take part in various competitions, concert tours, television programs, and commercials.

In 2007, she got her breakthrough as she was selected by the renowned choreographer Jaime King to star in an advert for Nike as a dancer as well as a role model representing hip hop and femininity. Whereas, she also became an international star during the campaign, ‘Madonna for H&M.’

Luck smiled at her one again soon after and she got another chance to work with Jackson. In February 2011, she also portrayed the main character in the music video ‘Hollywood Tonight’ by Michael Jackson.

Sofia acted as the main character, Eva, in the drama film, ‘StreetDance 2’ which was the sequel to ‘StreetDance 3D’ and she was a co-star in ‘Kingsman: The Secret Service.’

as well. Moreover, she also represented an alien warrior Jaylah in ‘Star Trek Beyond’ which hit the screens on July 22, 2016.

Therefore, in June 2017, she was cast in ‘Fahrenheit 451’, a film by HBO that will also feature Michael Shannon, and Michael B. Jordan.

She was the main antagonist, Princess Ahmanet, in Universal’s Dark Universe film The Mummy (2017). In 2017, she also starred alongside Charlize Theron in Atomic Blonde, the film adaptation of the graphic novel The Coldest City, as undercover French agent Delphine Lasalle.

She was nominated for Worst Supporting Actress for The Mummy (2017). She won the Female Star of Tomorrow at CinemaCon Award.

She has an estimated net worth of around $4 million (as per 2021 data) and she has earned that sum of money from her professional career.

There was a rumor that Sofia was dating Chris Pine (2016), and Robert Sheehan (2014). Currently, she is far from rumors and controversies.

Sofia Boutella has a height of 5 feet 5 inches. Additionally, she weighs is 54Kg. Sofia’s hair color is black and her eye color is dark brown. Her body measurements are 34-24-34 inches. Furthermore, her bra size is 32B.