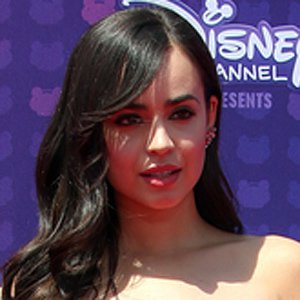 When I was 18, I moved to Los Angeles to attend UCLA

My family is everything. They love me unconditionally

I always loved Belle from 'Beauty and the Beast'. I always thought I looked like her, so I dressed like her for every Halloween.

Sofia Carson is reportedly single. But there were rumors about her relationship and affairs in the media with several boys.

In 2015, her name was linked with Booboo Stewart. Moreover, Sofia was rumored to be dating with Nolan Gerard Funk for a couple of months in 2016.

Apart from that, there were drastic rumors about her relationship with Cameron Boyce and Manolo Gonzalez Vergara (Sofia Vergara’s son)

Who is Sofia Carson?

Sofia Carson is an American singer and actress. She got huge recognition from the 2015 movie Descendants. As a singer, she has voiced in a soundtrack to the film Descendants.

Later, which became a huge success as the No. 1 chart in Billboard 200 and ranked as US Top soundtrack. Furthermore, she has also featured in A Cinderella Story: If the Shoe Fits, which was A Cinderella Story series.

Her parents had moved to Florida from Colombia. From the beginning of her childhood, she had a keen interest in acting and singing. As a child, she spent her childhood in Florida with her family.

Concerning her education, she joined St. Hugh School. Later, she completed her graduation from the Carrollton School of the Sacred Heart in Miami.

As an actor, Sofia Carson began her acting career as a guest appearance in 2014 with a Disney Channel series Austin & Ally. In 2014, she grabbed the lead role in the movie Descendants which was Disney Channel Original Movie.

Furthermore, she was cast in the leading role in the series of A Cinderella Story, If the Shoe Fits. Sofia landed her debut single ‘Love Is the Name‘ on April 8, 2016.

In addition, she launched the music video of Back to Beautiful in which Alan Walker was also featured. She reprised her role in the sequel Descendants 2, which was released on 21 July 2017.

Sofia was nominated for Teen Choice Awards in 2016 for Choice Music Next Big Thing.

This singer and actress’s net worth is estimated at around $6 million. Moreover, her salary as an actor is around $19k-$210k per year.

There were rumors about her relationship with Cameron Boyce. However, she clarified it saying he is just her friend and there is nothing between them.

Despite she denied the rumors, she was spotted several times with Cameron. Apart from that, she hasn’t been in any controversy. It seems like, she has more focus on her profession rather than in a relationship.

Sofia Carson is 5 ft 4 inches tall and weighs 51 kg. She looks so adorable with his cute smile.

Her hair color is brown and eye color is also brown. Moreover, she has a perfect body that measures of 33-24-36 inches.

On Twitter, she is followed by more than 822.9k people and 2.06 million followers on the Youtube channel.