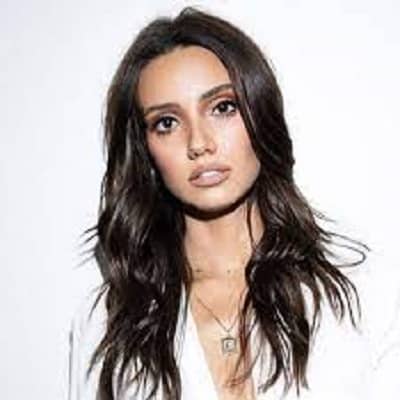 At present, she is in a relationship with her boyfriend Peter Nelson. They engaged in 2019.

His boyfriend is the Vice-president of HBO sports. They even work together on several projects. The lovely couple frequently post pictures together.

Who is Sofia Franklyn?

Sofia Franklyn is a famous American Podcaster, Blogger, and Radio Presenter. Further, she gained fame for being an Internet personality.

Additionally, she is popular for serving as the co-host of a trending podcast Call Her Daddy alongside Alexandra Cooper.

She hasn’t revealed any information related to her parents.

For elementary education, she joined a private school in Utah. Then, she enrolled at the University of Utah for further studies. She graduated with Bachelor’s Degree in Economics.

Primarily, she starred as a consultant in a company but she left that job shortly and moved to New York to begin a professional life.

In 2018, she started her career as a podcaster and blogger. She got hooked up with Barstool sports. Her content became popular on the internet.  Barstool Sports is a blog about pop culture and sports. She made her blog debut on the content focused on her own adventures in sex while back home in Utah.

Moreover, her content made her an instant hit. It leads to co-host in a trending podcast titled “Call Her Daddy” with her roommate Alexandra Copper.

Rumors were swirling about Sofia Franklyn of Call Her Daddy and her roomie Alex Copper regarding the fake story of Sofia’s side of the fallout between them.

Some of the comments were very rude towards Sofia on Instagram. The public was blaming her for not acknowledging that she and Alex were wrong for being shady towards Barstool Sports. People spread rumors about Sofia without strong proof. At last, Sofia responded to those suspicious rumors and it seems fake.

The trending podcast Call Her Daddy’s co-host Sofia Franklyn claimed that she got screwed by her best friend. She put her stories on Instagram. It was about the sordid drama behind the split of her smutty show and friendship with her roomie Alex.

She continually claimed that Copper stab her in the back while they were negotiating their contract with Barstool Sports. Sofia said that she caught Alex doing something behind my back and it wasn’t the first time. She explains that’s why they split up and she feels betrayed by trusting Alex.

She conveys the controversy that Alex and she were best friends and roommates in 2018 and they took up the show to Barstool Sports. At first, they always have been 50/50, and suddenly Alexandra demands to controls the show.

She has a net worth of $1Million and her source of income comes from being an effective Radio host and podcaster.

An American famous podcaster Franklyn has a height of 5 feet 5 inches. Her body weight is around 59 Kg.

Her eyes are stunning brown in color and her hair too.