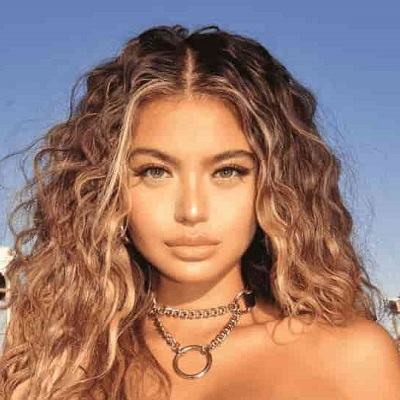 Sofia Jamora is neither married nor single.

Currently, she is dating a guy named Spencer Mow. Her boyfriend, Spencer is an Instagram Star too. However, the story behind the lovebirds is still a mystery to the public’s eyes.

Who is Sofia Jamora?

American Sofia Jamora is a model and an Instagram star who has appeared in One Direction ex-member Zayn Malik’s music videos Let Me and Entertainer in 2018. She is renowned for her modeling assignments.

Sofia has a beautiful phyique and does not shy sharing her pictures showing off her body.

She is also popular for her Instagram posts that went viral on the web.

Sofia Jamora was born on the 6th of May 1997 in Calabasas, California. She is of British-Irish ethnicity.

Till the date, she has not shared any information about her mother, father, siblings, and education.

Also, she shared a special bond with her mother as she was raised by a single mother.

As a model, Sofia Jamora was scouted by the Bikinis brand, Frankies Bikinis. Her first assignment as a model was to post for the brand. Moving forward, she posted for the clothing brands including Oh Polly, Love Piper, Windsor, and Tobi.

Later, she signed for the campaign, Forever 21, and signed with Freedom Models. In 2017, she made her way at the ramp of the Miami Swim Week and Frankies Resort 2017 show.

Her career took a major boost when she made her appearance in the Zayn Malik’s music videos Let Me and Entertainer in 2018. The video, Let Me has over 99 million views on YouTube.

As of now, she is one of the top models of the country. Besides modeling, she has also earned immense popularity in social media sites, Instagram for her post too.

The model has caught up in a controversy when she posted on her Instagram account accusing the fashion brand, Oh Polly chiefs owe her to pay for canceling her shoot at the end moment due to the wildfires in California that created a chaos at state the last year.

Also, she added that she drove for 2 hours to 200 miles at the extreme and dangerous condition. Moving forward, she also mentioned that the brand has not responded to her however, they are still using her photos.

After the Oh Polly has taken down all her pictures and videos.

Talking about her appearance, she has an angelic look with an oval-shaped facial structure. Also, she prefers to change her hairstyle from long to short and hair colors from blonde to white.