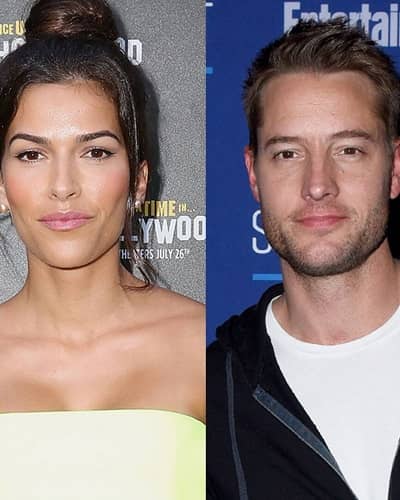 After some time, Justin posted another Instagram story of him relaxing in the pool with his dog, wearing the same Chicago Bears cap. Fans quickly spotted the links between the two posts.

They were first spotted kissing at the end of May outside a Los Angeles doctor’s office. But both chose to remain silent on the rumors of their relationship.

As per sources, they have been dating for some weeks now and are spending time together at his house. They met each other while working in the series The Young and the Restless. She appeared as his girlfriend in the show.

Justin Harley and Chrishell Stause crossed paths on the set of soap operas. They were introduced to each other in 2013 by a mutual friend who worked on Days of Our Lives. After that, they met up at a concert and talked all night.

“We met up at a concert and talked all night. I drove her home and called the next day. We haven’t been apart since. I knew right away [and] was like, ‘Oh boy, here we go.’”

They made their red carpet debut in West Hollywood and they announced that they got engaged two and a half years later in 2016. In 2017, they decided to take their relationship a step further. They got married in October 2017 at a beautiful outdoor ceremony at the Calamigos Ranch in Malibu.

“The wedding exceeded anything I could have ever imagined. They don’t make them any better than Justin, and I could not be more thrilled to officially be Mrs. Hartley!”

But their marriage did not work out even though they tried therapy. Justin filed for divorce in November 2019. They separated on 8th July 2020.

But the reason for their divorce is not revealed though they divorced publicly. It is said that Justin informed her about their split through text. Her failed marriage with Hartley left her hurt and upset.

“I obviously really, truly love him, and it’s unfortunate the way that everything happened and the timing of everything,”

How much is Sofia Pernas’ net worth?

Sofia Pernas has an estimated net worth of $500 thousand. She is a Moroccan-Spanish actress and has appeared in a number of films and TV series.

Similarly, Justin Hartley has a net worth of $7 million. From This Is Us, he received a salary of $250,000 per episode.

In 2019, he bought a newly-built home for $4.65 million in Encino, California. It was built in a modern farmhouse style.

He won Lead Actor for Daytime Drama for The Young and the Restless at Gold Derby TV Award. Read more bio…

Sofia Pernas has been able to steal the attention with her incredible acting and modeling skills. She climbed the stardom after she played Marisa Sierras on the soap opera, The Young & The Restless in 2015. Read more bio…

Former TOWIE star Ricky Rayment shares with his fans about his medical condition of Alopecia!
Tags : Actor The Young and the Restless