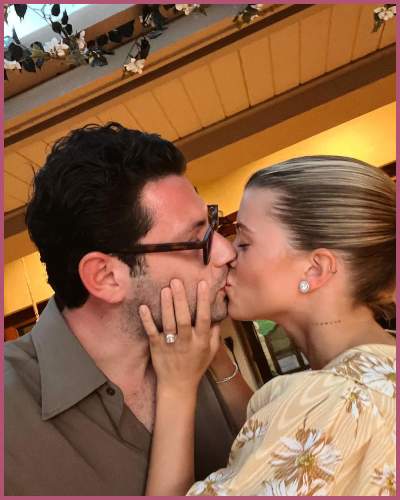 Congratulations are in order to the newly engaged couple Sofia Richie and Elliot Grainge.

The 23-years old model confirmed the happy news on Wednesday, April 20 that she is happily engaged to her music executive boyfriend, Elliot Grainge. Sofia, the daughter of Lionel Richie and Diane Alexander, shared a couple of snaps of the proposal on her respective IG handle.

In the first series, she posted a photo of Grainge down on one knee at the Four Seasons Hualalai. The moment looks so romantic as the two were surrounded by white flowers and candles that were provided by Uhi Uhi Flower House on Kona island.

Similarly, the second photo was a close-up of them kissing where Richie flaunts her diamond rock which her beau gave her.

She wrote a beautiful caption alongside the post which reads,

Also read “Who Is Elliot Grainge? Know Everything About Sofia Richie’s Rumored Boyfriend!”

As soon as the bride-to-be dropped the post, friends, and family of them quickly filled the comments with congratulatory messages. Lori Harvey wrote,

How does Scott Disick react to his ex Sofia’s engagement?

An hours after Richie’s engagement announcement, Scott shared a photo of himself on a boat with the caption,

As Disick might be comparing himself to the character “Charlie Kagan” (played by Dane Cook) of the movie Good Luck Chuck in which all the women who get romantically involved with Charlie end up marrying the first person they date after him.

It’s no wonder that Disick may be seeing a bit of himself in Charlie Kagan that two of his exes got engaged over the past six months.

Sofia began dating Elliot in February 2021, seven months after her final split from Disick, who she dated on/off for three years.

The couple first sparked romance rumors in April 2021 after stepping out together for takeout at Matsuhisa Beverly Hills. Then, the couple made their relationship official on Instagram days later.

“He thinks they are a perfect match and it was very natural progression for Sofia and Elliot to get together. They are all family friends and Sofia and Elliot [started] hanging out more recently this year. She thinks he’s hilarious and loves that he is a chill guy.”

Although Sofia and Elliot weren’t close growing up, the couple’s family has been friends and has worked together for years.

Sofia Richie is an American celebrity and model. She is popular for her famous fame and her peaking modeling career. See more…