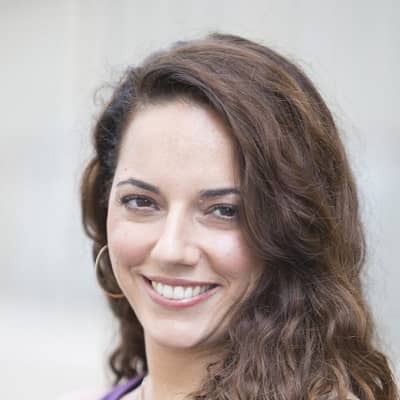 Sona Movsesian is married to the graphic artist Tak Boroyan. They married each other on August 25, 2018, at Holy Cross Apostolic Cathedral in Montebello, California.

On February 15, 2021, she announced that they together are expecting twin babies.

Who is Sona Movsesian?

Sona Movsesian is an American-Armenian Podcaster and media personality. She is popular as the personal assistant of the Tv host Conan O’Brien. Likewise, she has also co-hosted the podcast Conan O’Brien Needs a Friend.

Sona Movsesian born as Talin Sona Movsesian was born on October 13, 1982, in Montebello, California, the United States of America. As we can tell, she is 38 years old currently.

Her parents migrated to the USA from Turkey before she was born. As she has a secretive nature, she hasn’t disclosed her personal information much. Similarly, she tends to keep her personal life away from the limelight. Sona is the only daughter of her family. Additionally, she grew up in Hacienda Heights, California.

She holds an American Nationality and her ethnicity is Armenian. Moreover, Sona is an Armenian Orthodox Christian.

Sona completed her high school graduation from Armenian Mesrobian School. In 2005, she attended the University of Southern California.

Movsesian started her career as a Events and Operations Coordinator at NBC. She drew the media attention and came into highlight after being the personal assistant of the Tv host Conan O’Brien. Likewise, she has made her appearance in many tv shows such as Conan and The Tonight Show with Conan O’Brien and the 2011 documentary Conan O’Brien Can’t Stop.

In 2018, she co-hosted the podcast Conan O’Brien Needs a Friend alongside Conan O’Brien and another podcaster Matt Gourley. Moreover, she has also given her voice to the character of Princess Sugar Salt, in an animated tv series Power Players. Lately, she is writing a book titled ‘The World’s Worst Assistant.

It is difficult to determine her income and earnings because there is no information on her Finances. However, she has an estimated net worth of over $1M.

Sona is a very private person. Therefore, there are no rumors and Controversies about her.

Sona naturally has a tall height structure standing 5 feet 4 inches tall and a good body shape with an average weight of 64 kg. Likewise, she has charming dark brown eyes and hazel brown hair with a white skin tone. She follows her diet and workout plans strictly.