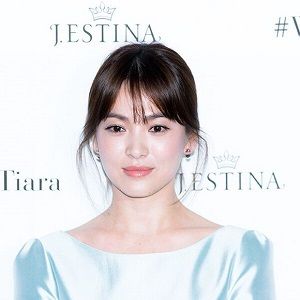 I cry if something bad happens. I grab a drink with friends when I get stressed out. I travel. I sometimes lash out at my closest friends.

In my late teens and early 20s, I worked hard on my roles, but, to be honest, I didn't feel any special commitment to acting.

Song Hye-Kyo announced her engagement with her boyfriend and co-actor Song Joong-ki on July 5, 2017. They married on October 31, 2017. Before dating Song Joong, she was in a relationship with Hyun Bin in 2009.

They broke up in 2011 after their two-year-long relationship. Song has also been dating Lee Byung-hun in 2003 but they quit in 2004.

Who is Song Hye-Kyo?

Song Hye-Kyo is a South Korean actress. Song gained a huge recognition for her role in 2000 television dramas Autumn in My Heart. In addition, success reached the new height from her extremely prominent work in dramas such as All In (2003), Full House (2004), Descendants of the Sun(2016) and much more.

As regards to Song Hye-Kyo early life, she was born on November 22, 1981, in Dalseo District, Daegu, South Korea. Her ethnicity is Asian and nationality is South Korean. Song’s parent separated when she was too young and later she grew up with his mother. Her father’s name was Song Dae-Seob.

From the beginning of her childhood, Song has a keen interest in acting. So, she began to participate in various contests and also won in several. She shifted to Gangnam District in Seoul with his mother.

Song completed her education from Sejong University with a major in Film Arts. She studied at Girls High School.

Initially, Song appeared in drama Autumn in My Heart in 2000 alongside Won Bin which became a huge hit in Korea. After that, her fame climbed to new heights and helped her to become a Hallyu star. Later in 2003, she gave another blockbuster All In which rose her name into another level. In the same year, she starred in a romantic comedy series Full house with singer and actor Rain.

In 2006, she made her film debut with My Girl and me, which was also a Korean remake. Song amazed all with her role in Hwang Jin Yi which was released in 2007. In 2008 she returned to his TV series with The World That They Live In.

Apart from her acting career, she has also published a photo book named Song Hye-Kyo’s Moment. Moreover, she has signed a contract with French global agency Effigies and released a photo-essay book in 2012 titled It’s Time for Hye-Kyo. Her latest venture is Descendants of the Sun which released in 2016.

Song has been earning a good amount of money from all of her drama series and movies. Currently, she has a net worth of $2 million. She hasn’t revealed information regarding her salary. She has achieved huge success from her acting career and is living a lavish life with decent earnings.

Once, the Korean beauty was stuck in a controversy where the suit was filed by a jewelry brand against her. She was penalized $260,000 for the jewelry brand J Estina, allegedly breaking the terms and conditions of the brand. Song has reportedly been in rumors in the relationship with Song Joong Ki, which later became true.

Song Hye-Kyo has a height of 5 feet 3 inches and weighs 50 kg. She has attractive brown eyes and black hair. Her body measurements are 34-25-34 and she wears a 34B sized bra.