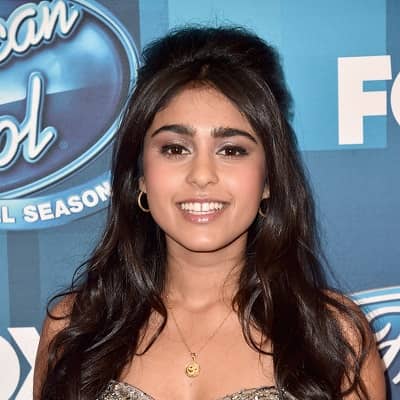 Sonika hasn’t talked about anything regarding her relationship status. And so we can say that she is single as of now.

Although there was various news that Sonika and Max Ehrich were dating in Oct 2020.

Who is Sonika Vaid?

Sonika Vaid is an American singer who finished in 5th place in Season 15 of American Idol. She has also released her singles after the show.

Sonika was born on August 4, 1995, in Weston, Massachusetts. Her full name is Sonika Kumari Vaid. Sonika has Asian(Indian) descent.

She is the daughter of Indian immigrants. Her parents emigrated to the United States when she was three years old. Although. the names of her parents are not known.

The singer has a younger brother. She started singing at the age of three. Likely she also plays piano.

She is a graduate of Weston High School in 2013. Meanwhile, she studied biology.

Sonika was studying in college as well as performing at a local park near her home for special events when she decided to try out for Idol.

Sonika then appeared as a contestant in the 15th season of American Idol. She finished in 5th place which gives her much fame. Sonika was even in the top 20 list of Glamour‘s “Women of the Year 2016”.

Likely she also released several tracks. Sonika released her debut track Ave Maria on December 21, 2018. From there, she has released other various hit tracks including Loved Me Back To Life, Fool Me Twice, and Spend It On You.

The singer had also collaborated with various music artists including Will Jay and Michael Korte.

Sonika must have amassed a good amount from her career. Yet her net worth is under review.

Furthermore, she earns from various endorsements including The Coca-Cola Company, AllSaints, Gucci, and Theory.

Sonika was rumored to be dating Max Ehrich in Oct 2020. Likely, she hasn’t faced any controversial news yet.

Similarly, she has dark brown colored hair and eyes.

Likely, she is also active on Tik Tok with around 800 fans.