Is Sonny Side Single or Married?

Sonny Side is a married man. By 2021, he was seen wearing a ring on his Youtube videos.

There is no detailed info about his wife. But Sonny Side frequently uploads videos including his wife on his Youtube channel.

Furthermore, he has avoided sharing his married life details publicly. 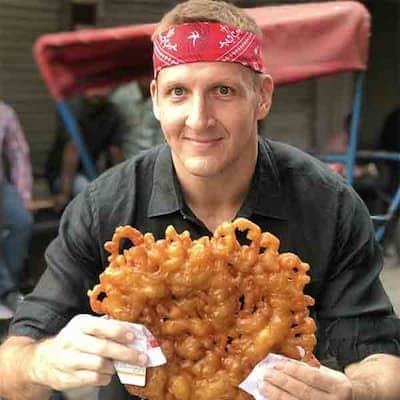 Quick Facts of Sonny Side

Relationship Facts of Sonny Side

Who is Sonny Side?

Sonny Side is a Youtuber and filmmaker. Sonny Side is the creator of the comedy/food review show and YouTube channel titled, ‘Best Ever Food Review Show’ which was made on September 23, 2010.

Sonny Side was born to his American parents on August 22, 1984. His birthplace is St.Cloud, Minnesota, the United States. His real name is William Sonbuchner.

Sonbuchner is 38 years old as of 2022 and maintains American nationality. His ethnicity is Caucasian while Leo is his birth zodiac sign according to the astrological chart.

Sonny Side went to Sauk Rapids-Rice High School. He shifted to South Korea to continue his teaching career furthermore. There is no further info regarding his parents and siblings.

After completing a professional filmmaking course in the USA, Sonny Side debuted his career as a filmmaker and in videos. He directed some music videos and web shows in South Korea prior to creating his Youtube channel.

He shares a variety of cuisines, foods, traveling, and cooking videos of different countries all over the world on his channel. “Eating with the World’s Most Isolated Tribe!!! The Tree People of Papua, Indonesia!!” is his most-viewed video, which is able to garner several million views as of now.

Eventually, his channel accumulated popularity all around the globe reaching a global audience. Within a short time, his channel received filming access in Iran becoming the only American YouTube channel.

His amazing content on his channel earned him the Webby Award for ‘People’s Voice: Viral Video of The Year.’ As of April 2022, his channel is enriched with more than 8.39 million subscribers.

Besides this, he has been featured in different newspaper articles and food magazines. He has established food restaurants all over the world. Similarly, he has begun his official merchandise, which is only found on his website.

Sonny Side- Net worth, Salary

Sonny Side has an estimated net worth of around 10 million USD as of 2022. This is the outcome of his earnings and saving from his hard work.

Though Sonny’s yearly salary and income are still under review.

Sonny Side is keeping himself away from scandals as well as rumors. He stays away from the limelight by maintaining a good balance between his professional as well personal life.

Sonny Side stands at the height of 6 feet 1 inch and weighs around 95 Kg. In addition, his body measurements are 42-33-39 inches which means his chest size is 42 inches, his waist size is 33 inches and his hip size is 39 inches.

Talking about his physical appearance, with a fair complexion, he has a couple of brown eyes and hair of the same color.

Sonny Side has a food review show, on a YouTube channel titled, ‘Best Ever Food Review Show’ which has garnered more than 8.4 million subscribers.

Mike Johnson talks about Demi Lovato: ‘she’s beautiful Inside and out’, Johnson wants another date with Lovato!!

Everything You Need To Know About Caro Colon; Trey Songz’s Baby Mama!