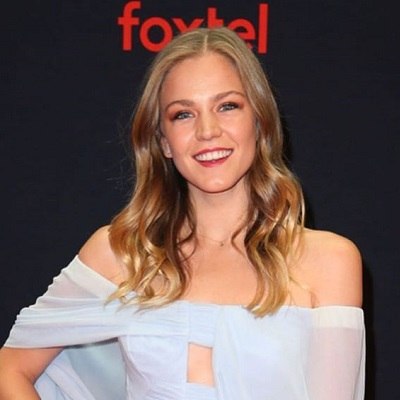 In recent days, she has revealed their relationship status via her Instagram post where they are spending their quality time in the carnival, Mardi Gras.

Prior to that, there were rumors that she is dating the actor, Russell Crowe.

Who is Sophia Forrest?

Australian Sophia Forrest is a Logie Award-nominated actress. She is renowned as Debbie of the series, Love Child.

Sophia Forrest was born on the 1st of November 1994 in Australia to the business family.

Her father, Andrew Forrest is a business personality renown as the former CEO of Fortescue Metals Group. Her mother, Nicola Forrest is a prominent philanthropist.

She has two siblings including the elder sister, Grace, and a younger brother, Sydney. They are of British-Germanic ethnicity. Talking about the educational background, she joined the Western Australian Academy of performing arts.

Sophia Forrest started her career as an actress in 2014 with the movie, The Water Diviner. In the historical drama, she appeared in the character of Edith. Two years after that, she featured the short, Riptide as Rae.

The following year, she featured the TV drama, Love Child as Debbie. The character, Debbie became of the most successful character in her acting career. After that, she appeared in the movies that include Reaching Distance, Aquaman, and Ride Like a Girl.

Through his career as an actress, she has an estimated net worth of $1 million. As an actress, her earnings are in the range of $20k to $214k.

Talking about the met worth, his father, Andrew Forrest has an estimated net worth of $10.5 billion. His net worth is attributed to his mining business in Western Australia. Back in 2008, he became the richest person in Australia with a net worth of $12.7 billion.

Till the date, she has not been through any kind of controversy that created a buzz in the media.

However, there were rumors of her dating the Gladiator star, Russell Crowe. However, the rumors faded out with the passing time.

Back in 2017, her father, Andrew donated $400 million to charity work. The donation happens to be the single largest donation in Australian history. At the time, he also told that the majority of his fortune will be given away.

In response, Sophia welcomed her father’s decision with the open heart and told that Inheritance never made sense to her. Also, she mentioned that she is going to work and make it on her own.

Sophia Forrest has blue eyes with blonde hair. She has a decent height and weight. However, details about her body stats are not available.

You may also read the bio of Sarah Bolger, Drena De Niro, and Erica Rose.