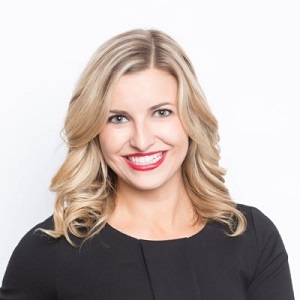 Sophia Minnaert is still single. She has also not been linked with anyone in the past. It seems she likes to keep her personal information within herself and she likes to be more focused on career rather than being in a relationship.

She was born in Madison, Wisconsin, USA. Her full birth date is unavailable but on July 23, her fans wish her birthday on social media. Her father’s name is Al Minnaert and her mother’s name is Sylvia Minnaert. Sophia’s father is the football coach at a high school in Madison but her mother’s occupation is unknown.

Sophia grew up with her two younger brothers: Alex Minnaert and Mario Minnaert. She used to play volleyball, basketball, and softball with them during her childhood. She grew up in a sports family and that might be the reason that she chose sports as her career.

Sophia holds American citizenship but her ethnicity is unknown.

She used to work at the high school’s sports production company named ‘When We Were Young Productions’ during her high schooling. Later she joined the University in Wisconsin and did her internship in the ESPN Internship program in Bristol, CT in 2008.

She joined WISN as an intern during her senior year and graduated with a degree majored in journalism, Spanish language, and literature in 2009.

While working with WISN, she was offered a job by FOX and she accepted the job. In 2012, she got the opportunity to work as a reporter with Fox Sports Wisconsin and she has been hosting the program since then. She is also one of the highly talented reporters. HSe has worked as a sideline reporter and host for Milwaukee Brewers and Bucks.

She created a documentary on baseball and named it as Baseball in the Dominican Republic. Also, she was with PlayOn! Sports from 2009 to 2013. On June 15, 2018, she was hired by the Brewers to the new position of broadcast and digital features content director.

She has won an Emmy award for her documentary ‘Baseball n the Dominican Republic’ in 2013.

She has an estimated net worth of around $1 million and she has earned that sum of money from her reporting and hosting work.

Once she was hit by a baseball in her hand while delivering news on Brewer’s defense. Luckily she didn’t get hurt and she continued to give news. This accident didn’t create any controversy but it was rare as we don’t see these types of incidents occasionally.

Sophia Minnaert has green eyes and blonde hair. Her height is 5 ft 7 inches and weight is 55 kg. Other information regarding her shoe size, bra size, dress size, etc are unknown.

Sophia Minnaert – the hardworking and determined reporter and sideline reporter for Fox Sports!