Sophie Dahl is a British fashion model and author.

Sophie Dahl is a married woman. She tied the knot with her boyfriend Jamie Cullum after dating him for a couple of years on 9 January 2010.

She also gave birth to two children Margot Cullum and Lyra Cullum. Since their marriage, they have also maintained a perfect relationship between them.

Moreover, they have been also spotted together in the public and media. Currently, Sophie and Jamie are enjoying their married life and living elegantly. 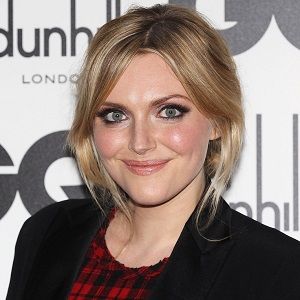 When I was a child, I named my rabbit Pancake and my guinea pig Maple Syrup

I was greedy and ate in that unselfconscious way teenagers do, constantly grazing and eating when I wasn't hungry

Who is Sophie Dahl?

Sophie Dahl is a British fashion model and author. She has modeled for Versace, Alexander McQueen, Patrick Cox, Pringle, and Gap. Furthermore, she has been also writing for American Vogue, The Guardian, The Telegraph, and few other big names.

Additionally, she has also released her two books, “The Man with the Dancing Eyes” and g with the Grown-Ups: A Novel”.

Sophie was born on September 15, 1977, in London, England, UK. She is the daughter of Julian Holloway and the writer Tessa Dahl. Talking about her nationality, she is British and her ethnicity is unknown.

Moving towards her education, she attended many schools including Bedales School.

Sophie Dahl began her modeling career as Vogue stylist Isabella Blow noticed her first and gave her an opportunity. In 1997, she made her modeling debut on the catwalk of Lainey Keogh’s first major show, in London Fashion Week.

During the contract with the management, she also worked for Versace, Alexander McQueen, Patrick Cox, Gap, and a few more. Furthermore, she has also shared her photo shoots along with some big photographers such as Richard Avedon, David Bailey, Peter Lindbergh, and few others.

Besides this, she has also done a couple of naked photoshoots for which she also got huge criticisms. In addition, Sophie is also a writer and she has also written for Vogue. Moreover, this famous model has been also writing for American Vogue, The Guardian, The Telegraph, and a few other big names.

Additionally, she has also released her two books, “The Man with the Dancing Eyes” and g with the Grown-Ups: A Novel”. Apart from that, Sophie also appeared in a couple of movies which include People I Know, Revengers Tragedy, and Mad Cows.

Being a famous model and actress, she earns a massive amount of money from her profession. Currently, she has a net worth of $8 million as of 2022.

As of now, she has won a Jasmine award for her column about the scent in Vogue.

So far, there are no rumors regarding her personal and professional life. However, she has gotten several criticisms for her naked photoshoot.

Sophie Dahl has a height of 6 ft and her weight is unknown. Moreover, she has a pair of gorgeous greenish-blue eyes and blonde hair. Besides this, there is not any information regarding her other body measurements.

Sophie is pretty active on social media but not on Facebook. Currently, she has more than 72.4k followers on Instagram and almost 32.6k followers on Twitter.